It Chapter 2: Bill Hader Did Not Want to Be Coy About Richie Tozier's Sexuality, Says 'It Wasn’t Just Lust, It’s Truly Love'

It Chapter 2 is running successfully in theatres. Bill Hader plays the role of Richie, the foul-mouthed comic relief of the film. During the course of the movie, we learn about Ritchie's sexuality, the one thing that the evil-clown picks up to bully him with. 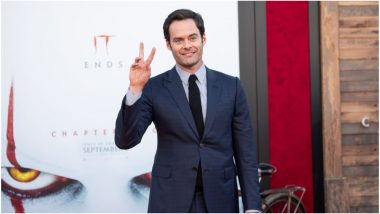 It Chapter 2 is running successfully in theatres. The movie is the sequel to the 2017's blockbuster horror film, It, which adapted the first part of Stephen King's novel of the same name. In the new film, we meet the grown-up versions of the kids from the first film. Bill Hader plays the role of Richie, the foul-mouthed comic relief of the film. During the course of the movie, we learn about Ritchie's sexuality, the one thing that the evil-clown picks up to bully him with. Ritchie also happens to have more than friendly affection towards his friend, Eddie, which is also subtly addressed in the film. It was quite a bold step for director Andy Muschietti to go about with the story in this war. But Bill, in an interview, has said that he insisted that they go all out. It Chapter 2 Movie Review: Scares and Laughs Galore, The Loser Club's Final Battle With Pennywise Is Worth It.

Bill Hader is without a doubt the best thing about It Chapter 2. In an interview with New York Times, talking the about the approach to his character, he said, "Andy and I talked about how overt we should make it, and I said if it’s not overt, then why is he in the movie? You can’t do a half measure on it. You’ve got to go the full way or don’t even allude to it. Let’s not be coy. Let’s just say what it is." We are certainly happy with the way they went ahead with the scenes.

Before the end credits start rolling, one of the members of the Loser Club, Eddie, fails to survive. Talking about the tragic scene where Ritchie sees Eddie's dead body, Bill said, "We did a lot of different versions of Eddie’s death scene. We did one where he’s clearly dead, and I’m refusing to recognize it. And somewhere I was very tender with him, where I’m caressing his face — this is the person I love, and it wasn’t just lust. It’s truly love,"

After watching It Chapter 2, you'd definitely think about Ritchie's love for Eddie. Bill also did. "But man, if he made the first move, that’d be the best thing ever,” he said.

(The above story first appeared on LatestLY on Sep 07, 2019 11:32 PM IST. For more news and updates on politics, world, sports, entertainment and lifestyle, log on to our website latestly.com).