Johnny Depp vs Amber Heard Defamation Trial: 10 Biggest Revelations From the Court Case That Will Shock You!

The revelations from the court case, to say the least, have been quite disturbing in many cases. There are some huge talks about trauma and domestic abuse that will definitely leave you shocked. 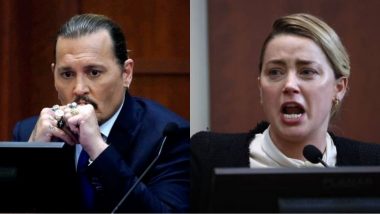 One of the biggest talks in the entertainment world right now is the defamation trial that’s going on between Amber Heard and Johnny Depp. After an extremely messy divorce that made both the parties name in Hollywood go down, Depp is currently suing Heard for $50 Million after she, without naming him, labelled the actor as an abuser in an article in The Washington Post. Heard is suing him back with a counterclaim of $100 Million as well. Amber Heard- Johnny Depp Defamation Case To Resume On May 16, Highlights Of The Testimonies So Far.

The revelations from the court case, to say the least, have been quite disturbing in many cases. There are some huge talks about trauma and domestic abuse that will definitely leave you shocked. So, with that being said, let’s take a look at 10 of the biggest revelations from the ongoing case of Johnny Depp and Amber Heard. Amber Heard vs Johnny Depp Trial: Video Of Actress Sniffing Into Tissue Paper Goes Viral; Twitterati Thinks She Is Snorting Something In Court.

Note: Some Points Here Can Be a Bit Disturbing.

Starting off the list with the biggest and most bizarre revelation yet, Johnny Depp spoke about how Amber Heard reportedly defecated on her side of the bed and blamed the dogs for it. This apparently happened back in 2016 after the couple had an argument.

During the court case, Depp’s text with Vision actor Paul Bettany were brought up. In the text both Depp and Bettany talked about burning and drowning Heard. The transcription of the texts is extremely graphic to say the least. There were some brief mentions of necrophilia in there as well.

Musk’s relationship with Heard has been a huge part about this on-going trial. Apparently, Musk offered 24/7 protection to Heard from Depp. They had a really long relationship as well, that apparently involved Cara Delevigne too.

During the trial, the texts shared between Amber Heard’s mom and Johnny Depp were made available as well. In the text message, Heard’s mom told Depp that she loves her.

During the case one of the biggest things that have been mentioned are Heard’s abuse towards Johnny. In an audio clip, Johnny reveals that Amber punched him to which Heard denied saying that she was only hitting him, and not punching him.

Cutting Off His Finger

Apparently, Heard was responsible for Johnny Depp’s severed finger. The actor revealed that he didn’t want Heard to get into trouble, so he didn’t tell anyone about who had done it. Depp’s doctor confirmed it during the trial that Johnny’s finger was almost cut to the bone.

Painting on the Wall with His Blood

After his finger was cut off, Depp reportedly painted on the wall with his blood. The actor himself revealed that he would then dip his finger in paint again to do so.

During Amber Heard’s time to speak, the actress revealed that Depp kept on abusing her and subjected her to violence. She talked about how there were multiple bruises on her face and that how Johnny sexually assaulted her with a liquor bottle as well.

Depp’s bodyguard, Travis McGivern testified that he saw Amber Heard punch Depp in the face which surprised the actor. This then led Travis to escort Depp out of the house before something bad would take place.

(The above story first appeared on LatestLY on May 11, 2022 05:41 PM IST. For more news and updates on politics, world, sports, entertainment and lifestyle, log on to our website latestly.com).