Josh Hartnett Birthday Special: Did You Know That the Pearl Harbour Actor Has Worked With Bipasha Basu and Abhay Deol in a Time-Travel Film? (Watch Video)

As Josh Hartnett celebrates his birthday on July 21, let's take a look at the time when he worked in a time-travel flick that also starred Bollywood actors Bipasha Basu and Abhay Deol. Watch! 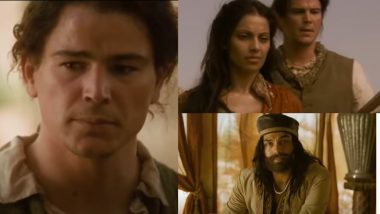 Actor Josh Hartnett is no new to the business. He has been here since quite a long time and there's no doubt about it. Talking about his career, it was in 1997 that Josh as Michael Fitzgerald in the television crime drama series Cracker snatched everyone's attention. It was from here on that he signed more projects and was seen in Halloween H20: 20 Years Later, The Faculty, Pearl Harbour, Black Hawk Down, and more to name a few. However, did you know that the Hollywood star has also worked with Indian actors in a film? Josh Hartnett Birthday: These Pictures of the Pearl Habor Star Are a Treat for Your Eyes!

So, basically, Josh was the lead star in a movie titled The Lovers which also starred Bipasha Basu and Abhay Deol in key roles. The story of the flick is based on an epic and riveting romance that is set across two time periods and continents. In the movie, Bipasha plays the role of a Maratha warrior Tulaja Naik whereas Abhay is Udaji. There are multiple love-making scenes too between Josh and Bips. The Lovers is helmed by Roland Joffé. Sofia Vergara Birthday Special: Bombshell's Red Carpet Looks That Are Sexy and Stylish (View Pics).

For the ones who have not watched The Lovers, fret not, as it is available to watch for free on YouTube. It's a brilliant piece that is kind of an amalgamation of desi and videsi. Currently, Hartnett lives in England, with his wife Tamsin Egerton and their three children. Workwise, he will appear alongside Jason Statham in the Guy Ritchie thriller Wrath of Man. Happy birthday, Josh!

(The above story first appeared on LatestLY on Jul 21, 2021 09:10 AM IST. For more news and updates on politics, world, sports, entertainment and lifestyle, log on to our website latestly.com).