Juliette Binoche Birthday: 5 Best Movies of the French Actress that are a Must-Watch

An Academy Award winner, she has excelled in multiple roles and it's time we name five of our personal favourites. Have a look at our list. 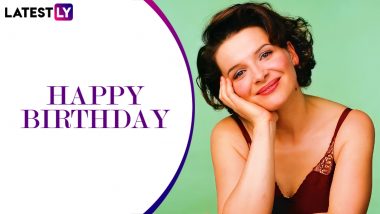 Juliette Binoche, the French actress celebrates her birthday on March 9. And what better way to celebrate her birthday than plan a marathon of all her movies. Juliette was always considered a powerful performer and she was a delight to watch on the big screens. An Academy Award winner, she has excelled in multiple roles and it's time we name five of our personal favourites. Have a look at our list. Nicholas Sparks Birthday Special: From The Notebook To The Choice, A Look At Some Of His Best Adaptations.

This Italian drama revolves around a mother who's waiting for her son to return while staying with his fiancee in Sicily. While the mother is convinced that he won't return, she finds it difficult to convey the same to his fiancee. Loaded with fine performances, this movie definitely deserves your attention.

If we are mentioning Juliette's best works, Chocolat has to find a mention in our list. The movie that earned her an Academy Award nomination in the Leading Actress category revolved around an atheist woman, a chocolatier who convinces villagers that chocolate is not against their religious beliefs.

Another gem in Juliette's filmography, Cache is actually a psychological thriller. It revolves around a family who receives a parcel containing several videotapes. While they ignore it initially, the details in those tapes start bothering them. It was an Australian production, shot in French.

The Unbearable Lightness of Being

Based on the time when Russia invaded Czechoslovakia, the movie starts as a romantic drama but soon turns into something political. A womaniser who marries a 'woman man', this movie takes a more emotional turn when he witnesses the Prague unrest. Emma Watson Birthday: Apart From the Harry Potter Saga, 4 Film Adaptations Of Famous Books That the British Actress Starred In.

The movie that won her an Academy Award in the Best Supporting Actress category, The English Patient is based during World War II. Juliette plays a nurse who's nursing an English patient in an Italian monastery. The tragic tale of love and misery, this one will definitely make you root for Binoche.

We wish this talented actress a very happy birthday and here's raising a toast to her beautiful self! Have a great day Juliette Binoche.

(The above story first appeared on LatestLY on Mar 09, 2021 09:00 AM IST. For more news and updates on politics, world, sports, entertainment and lifestyle, log on to our website latestly.com).