Jumanji the Next Level Movie Review: Jack Black, Danny DeVito Steal the Show in Dwayne Johnson’s Glitchy but Funnier Sequel to the 2017 Film 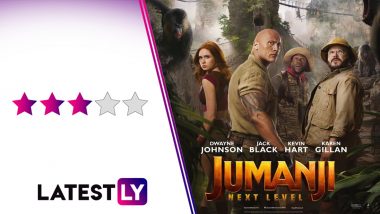 Jumanji The Next Level Movie Review: The 2017 film Jumanji: Welcome to the Jungle had been an oddity. You never expect a belated sequel/reboot to be a good thing, especially when the original Jumanji, starring the late Robin Williams, was adored by many of his fans. But Jumanji: Welcome to the Jungle changed the rules of the game and adapted to present times to offer a fresh spin to the jungle adventures. It also helped that the new Jumanji had a fantastic main cast in Dwayne Johnson, Karen Gillan, Kevin Hart and Jack Black, whose splendid chemistry made the film so much fun to watch. Now the same team, along with director Jake Kasdan, are returning for the sequel, so can we expect the same magic? Jumanji: The Next Level Early Reactions Say Dwayne Johnson, Karen Gillan Starrer is Funnier Than the Prequel, Kevin Hart Wins Big Praises.

It has been a year since the events of the previous Jumanji has happened and Spencer (Alex Wolff), Fridge (Ser'Darius Blain), Martha (Morgan Turner) and Bethany (Madison Iseman), continue to remain friends even though they have gone to colleges in different cities. All seems well, at least, with most of them. Spencer and Martha have now broken up and Spencer is still hurting from it. When he returns home from college, he is looking to avoid his friends who are also around.

To his irritation, Spencer also finds out that he has to share his bedroom with his grandpa Eddie (Danny DeVito), who is having hip problems. Eddie used to be a popular restauranteur who believes his former friend and business partner Milo (Danny Glover) had let him and their restaurant down.

A frustrated Spencer decides to play Jumanji again to feel what it is to be his avatar Dr Bravestone (Dwayne Johnson). When his friends come to his house to enquire his whereabouts, they find out what he did, and decide to get back in the game to save him. Only the videogame malfunctions and it takes in even Eddie and a visiting Milo, but leaves Bethany behind.

In the game, the new team realises that, save for Martha who is back as Ruby Roundhouse (Karen Gillan), the others have switched avatars. Fridge, who used to be the zoologist Mouse (Kevin Hart), is now cartographer Shelly (Jack Black). Grandpa Eddie becomes Bravestone, while Milo has become Mouse. Martha and Fridge are surprised to find out that the game has changed - they have new abilities, a new task and a new enemy in a wild, merciless warlord Jurgen the Brutal (Rory McCann). And they have no clue where Spencer is.

The previous Jumanji movie smartly merged the elements of a wild-ride adventure within the framework of a typical videogame. This helped in making the film relevant and fun for the young audience to catch all the videogame tropes (multiple lives, weakness and strengths, booby traps et al). The sequel continues to explore the same path, with newer eye-catching terrains, terrific background score by Henry Jackman and a couple of good action beats. The sequence involving the many rope bridges and the countless mandrills will leave you breathless in tensed excitement.

There is also more focus on reducing some of the loopholes of the first film. Like, whenever within the Jumanji, the action shifts to the villain's perspective, the protagonists see it as a cutscene. But the first film had a couple of scenes where the antagonist didn't really behave like an NPC (non-playable character) and the scene didn't behave like a cut-scene. Jumanji: The Next Level avoids such contrivances but in the process, makes newer glitches in the game.

For one, the movie lacks the freshness that the first film brought into the arena, and basically feels like a repeat of what we saw in 2017, even if it is a whole new adventure. Sure, the 'switching of avatars' did lend for a different (and funnier) perspective, and allows The Rock, Kevin Hart and Jack Black to have fun and be someone else. That, in my humble opinion, makes Jumanji: The Next Level funnier than the 2017 film. But some of the borrowed tics (The Rock smouldering, the marketplace brawl, Bravestone and Mouse having a go at each other) becomes less funny as the movie proceeds. Jumanji: The Next Level Premiere - Dwayne Johnson and Wife Lauren Hashian Make a Dazzling Red Carpet Debut Since Marriage (View Pics).

By the time the movie reaches the third act and a lot more characters enter, we could really feel the stretch and it then ends with a 'been there, done that' feeling. The antagonist, once again, is disappointing. Despite that heavy name, Jurgen the Brutal is taken down way too easily by the heroes.

Also, is it me or were the number of animal species, the most fun fact about the original film, is getting lesser with every movie? Where are those man-eating plants that were a star in the first Jumanji?

However, some of the aspects that The Next Level retained work in its favour. Like that incredible cast. Every actor plays off well against each other - be it the younger ones, or the established stars. Every time Johnson and Hart try to imitate DeVito and Glover respectively, we can't help but chuckle. Jack Black is once again the scene-stealer here -  his exaggerated body language and his trolling of his avatar and the game are supremely comical. Karen Gillan, however, while fine in her role, gets in a mould that leaves little scope to develop her as a character. That said, I have to appreciate Kasdan for trying to delve into the flawed aspect of Spencer and Martha's relationship that began at the end of the last film - that they found their spark in each other while in different bodies. But before Eddie and Spencer's friendship, this track kind of pales.

Watch The Trailer of Jumanji: The Next Level:

For Jumanji: The Next Level finds its heart in how it deals with its new veteran characters. Eddie and Milo's constant ribbing off each other, Milo being an appreciative wingman for Eddie's Bravestone charms and their eventual patchup bring a lot of warmth to the proceedings. In a movie about CGI animals and The Rock obsessing over his pecs, it is surprising to see Jumanji: The Next Level deal with touching themes like mortality, old age and forgiveness. Both Danny Glover and Danny DeVito have brief roles, but Johnson and Hart make us feel they are present throughout the film. That said, Danny DeVito nearly gets to walk away with the film, even in his short screentime, with a performance that is funny, poignant and heartwarming. His last scene in the movie is the humorous bit of them all.

Also a special mention to the talented Awkwafina who is brilliant in every scene she is in. Nick Jonas is charming and gets to do a bit more here, than in the previous one.

- A Couple of Action Beats

- Lacks The Freshness of Its Predecessor

You may not be able to ignore the deja vu feeling and its Bravestone-sized flaws. But Jumanji: The Next Level is, fortunately, not a letdown and turns out to be a very likeable, heartwarming entertainer. It is funny, the actors are in fine nick and the emotional beats mostly work.

The mid-credit sequence ends with a promise that the next instalment could change the game again and bring the saga closer to the original Jumanji. Fingers crossed for that!

(The above story first appeared on LatestLY on Dec 10, 2019 10:12 PM IST. For more news and updates on politics, world, sports, entertainment and lifestyle, log on to our website latestly.com).