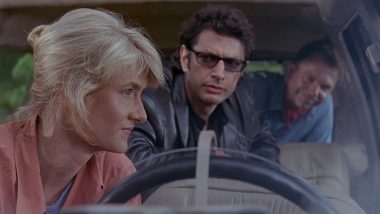 Fans were ecstatic when it was announced that Jeff Goldblum will be reprising his Jurassic Park role of Ian in Jurassic World: Fallen Kingdom. Unfortunately, he pretty much appeared in a blink and miss cameo in the film. So, when it was announced that Jeff along with Laura Dern and Samil Neill - the original Jurassic Park trio - was returning for Jurassic World: Dominion, there were reservations that their roles might not be very important to the plot. But, now, the director Colin Trevorrow has said that we might be underestimating the size of their roles. Jurassic World: Dominion's Sam Neill And Jeff Goldblum Have a Musical Collaboration! (Watch Video).

Talking about the film, that has resumed production amid the pandemic, the director said, "This is the movie that I’ve been waiting to make from the beginning. It’s the one that we have spent the past two movies building to. It really was part of a larger story and part of the design."

He added, "And I think people may be underestimating the size and importance of Laura Dern and Sam Neill and Jeff Goldblum’s characters in this movie. It is very much an ensemble, and that [includes] the ability to take these beloved characters from almost 30 years now, and understand how they interact with each other in the context of a world that we’ve really never seen before, and have not been able to witness until now." Jurassic World Camp Cretaceous Trailer: Kids Are About to Become Dinosaurs' Happy Meal in This Netflix Animated Series (Watch Video).

In the original film, by Steven Spielberg, Sam Neill played Dr Alan Grant, Laura Dern played Dr Ellie Sattler and Jeff played Dr Ian Malcolm. All three get trapped on an island with the dinosaurs and their bid for survival makes for an edge-of-the-seat plot. While Jeff reprised his role in a full-fledged capacity in The Lost World: Jurassic Park, Neill played the lead role in Jurassic Park III again.

in Jurassic World: Dominion, Chris Pratt and Bryce Dallas Howard also reprise their roles from the two prequels. The movie's plot will be about the world inhabited by the dinosaurs who have escaped the island.

(The above story first appeared on LatestLY on Sep 25, 2020 11:53 PM IST. For more news and updates on politics, world, sports, entertainment and lifestyle, log on to our website latestly.com).