Just like how Mara has been winning hearts on the professional front, she is garnering love on the personal front as well. She is always vocal about brewing issues and is very vociferous when it comes to speaking about animals. 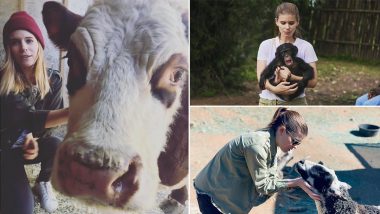 Kate Mara is one of the most humble actors in Hollywood. She kickstarted her career with television when she featured in NBC legal drama Law & Order in 1997. She then made guest appearances on numerous television series, including Madigan Men, Ed and Law & Order: Special Victims Unit and bagged her first lead role in 2004 The WB pilot Prodigy, about a teenage child prodigy. She went on to be a part of shows like American Horror Story, House of Cards and more. Fantastic Four Director Josh Trank Reveals How the Studio Wasn't Open to Casting a Black Actress for the Role of Sue Storm.

Not only television, but Kate Mara also created a wave on the film front. She bagged her first role in Random Hearts, alongside Harrison Ford in 1999 and won hearts with her stellar acting. She went on to star in the Sundance Film Festival award-winning films Joe the King and Tadpole alongside Sigourney Weaver as well. She has since appeared in films like Shooter, Brokeback Mountain, The Open Road, We Are Marshall, Megan Leavey, Fantastic Four, My Days of Mercy amongst others.

Just like how Mara has been winning hearts on the professional front, she is garnering love on the personal front as well. She is always vocal about brewing issues and is very vociferous when it comes to speaking about animals. She loves to take care of them and her Instagram is full of her adorable pictures with animals. Today, as the actress is celebrating her 38th birthday, we decided to take a look at some of these pictures.

The One With The Sheep

Kate visited the Farm Sanctuary, an adaptation that rescues, educates people and advocates for farm animals. The actress is seen have a sweet conversation with a sheep here.

The One With The Chimpanzee

Kate is seen holding a baby chimpanzee in her arms and it looks quite happy about it too. The actress is an active part of the organisation called Liberia Chimp Rescue Protection and is often spotted hanging out with her little buddies.

The One With The Cuddly Cow

This picture has to be the sweetest one. Kate can be seen sharing a precious moment with the cow. She loves to visit The Gentle Barn and now we understand the reason behind it. Filming Fantastic Four Was a 'Horrible Experience', Says Kate Mara.

The One With The Sleepin Cow

Another photo that proves why Kate loves The Gentle Barn has to be this one. This picture is adorable as we see the actress watch over a sleeping cow peacefully.

The One With The Duck

Kate was visited by a special guest on the sets of one of her projects. She made sure she gets clicked with the duck and we are very impressed with the result. The picture melts your heart right away.

These pictures are hear-warming and we hope Kate continues to spread love in the same manner. Join us to wish the amazing actress a very happy birthday.

(The above story first appeared on LatestLY on Feb 27, 2021 09:10 AM IST. For more news and updates on politics, world, sports, entertainment and lifestyle, log on to our website latestly.com).