KUWTK Promo: From Kourtney Being Pregnant With Scott Disick's Baby To Khloe Addressing Relationship Insecurities With Tristan, Here's What You Can Expect from The Show's Latest Season (Watch Video) 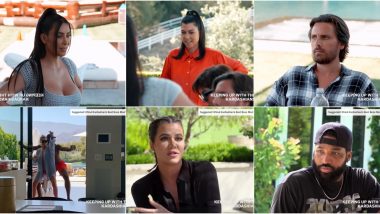 Keeping Up With the Kardashians Promo (Photo Credits: YouTube)

Keeping Up With the Kardashians will soon be bidding goodbye to its loyal audience after a successful run of 18 seasons. A few days back, Kim took to Instagram to announce the heartbreaking news. And while the decision has come as a shock to many, what has turned up to be even more shocking is the show's latest promo. The show that returns with fresh episodes on September 17, released its promo and it has some shockers. Keeping Up With The Kardashians to End After 14 Years: Kim Kardashian Makes this Shocking Announcement.

Apart from featuring filming and filming struggles of the family during the pandemic, the new season will also see Scott telling Kim that he and Kourtney are headed towards baby no. 4 and Kim will immediately question Kourt. This will also be followed by Khloe addressing her concerns of getting back with Tristan, a bit of Kendall's drama with Corey and also Mallika's baby shower. Keeping Up With the Kardashians Is Ending Because of Kim Kardashian and Kylie Jenner: Report.

Is the fam ✨ expecting ✨ some news? Find out when #KUWTK returns Thursday at 8|7c on E!

During the lockdown, the Kar-Jenner family was constantly in the news for one reason or another. While Khloe sparked patch up rumours with baby daddy Tristan, Scott has broken up with Sofia Richie (reports stated that the reason for the split was his children's mother Kourtney Kardashian and how she would always be a priority for Scott). Kim had to deal with husband Kanye West's controversial personal admissions about daughter North and her marriage with him.

(The above story first appeared on LatestLY on Sep 17, 2020 11:29 AM IST. For more news and updates on politics, world, sports, entertainment and lifestyle, log on to our website latestly.com).