Like Daniel Craig's Audition for Rang De Basanti, Did You Know That Gerard Butler Was Almost Cast in Aamir Khan's Lagaan?

Daniel Craig isn’t the only actor to audition and not appear in a Bollywood movie? That’s right before him Gerard Butler had also auditioned for a role in Lagaan. Read on... 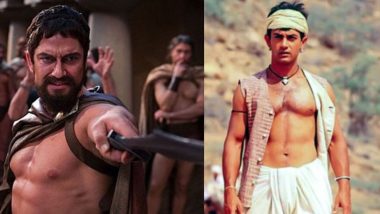 Hollywood actors showing up in Bollywood films isn’t as uncommon as one would think. From Will Smith appearing in Student of the Year 2 to Sylvester Stallone in Kambakkht Ishq, there have been quite a few appearances from Hollywood actors in Bollywood films. So it came as no surprise today when it was revealed that the current James Bond, Daniel Craig, had also auditioned for a role in Rang De Basanti. Gerard Butler Birthday Special: Not Just 300, These 5 Performances of the Actor are Equally Amazing and Must Be Appreciated More!

Filmmaker Rakeysh Omprakash Mehra recently revealed Daniel Craig had auditioned for the role of a British jailor who walks freedom fighters Bhagat Singh, Rajguru and Sukhdev to be hanged. He, unfortunately, couldn’t feature in the film because he was in the runner-up to become the next James Bond. Whatever happened after that is just history, but did you know that Daniel Craig isn’t the only actor to audition and not appear in a Bollywood movie? That’s right! Before him, 300 star Gerard Butler had also auditioned for a role in Lagaan but unfortunately didn’t appear in the movie.

The Scottish actor is a known fan of Bollywood, so much so that he has quite a relationship with Priyanka Chopra too. Gerard recalled in an article with DNA that he has been quite aware of Bollywood. Butler said that, "I am very very aware of Bollywood and I am friends with many Bollywood actors.” He adds saying, “I even auditioned for a Bollywood film, gosh that was thirteen years ago, I think it was Lagaan, and that was a great movie, I love that movie." Daniel Craig Auditioned for Aamir Khan's Rang De Basanti But James Bond Played Spoilsport, Reveals Rakeysh Omprakash Mehra.

The Geostorm star, in the same interview, went on to reveal how Priyanka Chopra had thrown a party for him and was even asked to star in Kaminey. He says, “Then she had another film, Kaminey, something like Guy Ritchie, Tarantino style. They had even asked me to do a role in it. That didn’t happen, but what an amazing film."

While Gerard and Daniel may not have got to work with Bollywood, Annabelle Wallis, the star of Peaky Blinders, The Mummy Reboot and the upcoming Malignant, has begun her movie innings with a a Hindi film, also starring Amitabh Bachchan.

(The above story first appeared on LatestLY on Jul 28, 2021 04:39 PM IST. For more news and updates on politics, world, sports, entertainment and lifestyle, log on to our website latestly.com).