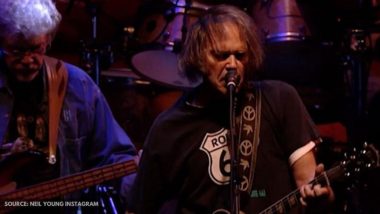 Singer Neil Young has been a vocal critic of POTUS Donald Trump. He has once again called him out for using his songs at political events. Trump's event at Mount Rushmore in South Dakota Friday night featured Like A Hurricane and Rockin’ in the Free World by Neil Young. As per reports, the songs were repeatedly played. And Neil Young is not OK with it. List of Celebrities Losing Their Home in California Grows Longer, Now Includes Miley Cyrus, Neil Young and Robin Thicke.

His representative Twitter handle Neil Young Archives retweeted a clip from the event when the song Rockin’ in the Free World was played. The words attached to the retweet were, "This is NOT ok with me..."

At the event, Trump has said in his speech that US history was under siege from “far-left fascism”. George Clooney Slams Donald Trump, Thanks the US President to Make Juneteenth Famous.

Neil, who became a citizen of the US earlier this year, and is a Berny Sanders supporter, has previously objected to the usage of his songs by Trump administration in 2015. The song "Rockin' In The Free World" was played at Trump's presidential announcement.

In an open letter to Trump in February, Young wrote, "You are a disgrace to my country. Your mindless destruction of our shared natural resources, our environment, and our relationships with friends around the world is unforgivable.… Our first black president was a better man than you are."

He added that his dirty "is not a song you can trot out at one of your rallies… Every time ‘Rockin’ in the Free World’ or one of my songs is played at your rallies, I hope you hear my voice. Remember it is the voice of a tax-paying U.S. citizen who does not support you. Me."

(The above story first appeared on LatestLY on Jul 05, 2020 04:12 PM IST. For more news and updates on politics, world, sports, entertainment and lifestyle, log on to our website latestly.com).