Once Upon a Time in Hollywood New Poster: A Lovely Margot Robbie As Sharon Tate Belies the Tragedy That Awaits Her!

Once Upon A Time in Hollywood is one of the most anticipated films of the year, thanks to the talent involved in the film. It is the ninth film of the cult filmmaker Quentin Tarantino. 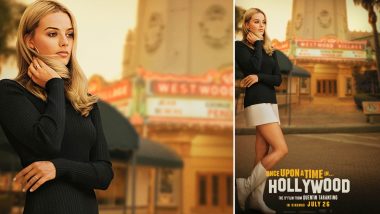 Margot Robbie in Once Upon a Time in Hollywood poster (Photo Credits: Sony Pictures)

Coming back the posters, the first one had Leo, who plays a television actor Rick Dalton, and Brad Pitt, who plays his stunt double, pose for the profile. Now the second poster is all about Margot Robbie. The Wolf of Wall Street and Suicide Squad star plays late actress Sharon Tate in the film. Once Upon a Time in Hollywood: Leonardo DiCaprio, Brad Pitt, Margot Robbie, Al Pacino – Who Is Playing Who in Quentin Tarantino’s Film!

In the poster, Margot is looking slightly forlorn as she gazes towards something at a distance. In the background, you can read a billboard that shows she is near the famous Westwood village os Los Angeles. Little does the poster depict the tragedy that awaits her character.

For those are not aware of Sharon Tate's tragic story. the actress, who was married to director Roman Polanski, was murdered by members of the infamous Manson Family cult at a party hosted by her in 1969. She was eight and a half months pregnant at the time of her murder.

Now we don't know how closely Quentin Tarantino will follow the real-life incidents, since Leo and Pitt's characters are entirely fictional. In Inglorious Basterds, Tarantino had a very fictional, but enjoyable take on Second World War, where Adolf Hitler, instead of committing suicide, was killed in two assassination attempts together. Will Tarantino attempt something similar with the case of Sharon Tate? We have to wait till July 26 to find out about this!

(The above story first appeared on LatestLY on Mar 19, 2019 07:34 PM IST. For more news and updates on politics, world, sports, entertainment and lifestyle, log on to our website latestly.com).