Oscars 2021: Daniel Kaluuya Thanks His Parents for Having Sex in His Acceptance Speech, Actor’s Mother Reaction Goes Viral (Watch Video)

Daniel Kaluuya won the Best Supporting Actor for his work in Judas And The Black Messiah at the 93rd Academy Awards held in the city, on Monday morning India time. His acceptance speech tickled the funny bone at the ceremony, and his mother's priceless reaction has gone viral. 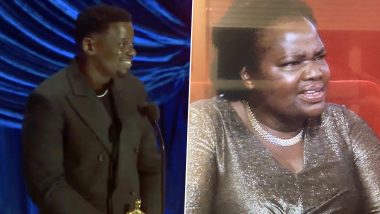 Later, on winning, Kaluuya said: "I'd like to thank my mom. Thank you so much for pouring into me. You gave me everything. You gave me your factory settings so I can stand at my fullest height." He added: "There's so much work to do, guys, and that's on everyone in this room. This ain't no single-man job. I look at every single one of you: We've got work to do. I'm gonna get back to work Tuesday morning because tonight, I'm going up. Daniel Kaluuya’s Hilarious Saturday Night Live Act Wins the Internet, Actor Takes a Dig at the British Royal Family – WATCH.

Lol at Daniel Kaluuya’s mom reacting to him shouting his parents for having sex during Oscars speech 😂😂😂 pic.twitter.com/E3jdwlcBoz

"We're going up! We're enjoying ourselves tonight because we've got to celebrate. We've got to celebrate life, man. We're breathing! We're walking! It's incredible. life's incredible!" he added. The speech later took an amusing turn when he acknowledged the reason he was there at the Oscars to win an award. "My mom, my dad; they had sex, it's amazing! I'm here! I'm so happy to be alive, so I want to celebrate that tonight," he said.  As soon as his speech finished, the camera panned to his mother, who had a flummoxed even as the actor's sister could not stop laughing. The clip has now gone viral.

(The above story first appeared on LatestLY on Apr 26, 2021 02:01 PM IST. For more news and updates on politics, world, sports, entertainment and lifestyle, log on to our website latestly.com).