This isn't the first time Chris Rock had made a joke on Jada though. While he was hostings Oscars 2016, the comedian had joked about Jada boycotting the Oscars because no Black person was nominated that year. 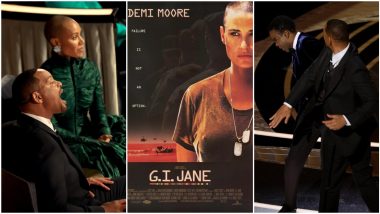 Oscars 2022 will be talked about for days to come, not for its winners of the night, though. Will Smith might have won the Best Actor award, his first acting Oscar, for his sublime performance in King Richard, but he will be talked more about his infamous fracas with Chris Rock. Smith slapped Rock after the latter made an allegedly disparaging joke on his wife and actress Jada Pinkett Smith while presenting an award at 94th Academy Awards. Rock had called her GI Jane 2. Oscars 2022: Here's Why Will Smith Punched Chris Rock For the Jada Pinkett Smith Joke at the 94th Academy Awards.

So what was the joke about? When Chris Rock came on stage to present the Best Documentary Award, he decided to make a joke on Will Smith who hadn't yet won the Best Actor trophy, and then shifted attention to Jada, sitting next to her husband. Referring to her nearly bald head, Rock jibed she could play the lead in GI Jane 2.

This didn't go down well with both the Smiths. While Jada had an annoyed expression on her face, her hubby walked up on the stage and smacked Chris' on his face. While the viewers were confused if this was an act, Will Smith cleared the airs about it when he returned to his seat and yelled at Rock to 'keep my wife's name out of your f**king mouth!'

VIA JAPANESE TELEVISION: The uncensored exchange between Will Smith and Chris Rock pic.twitter.com/j0Z184ZyXa

After the incident went viral, there has been a curiosity among the netizens as to what this 'GI Jane' joke is about. Fans of '90s schlocky action movies might know the answer for this. If you are not, it is a Demi Moore movie, that was directed by the great directed by Ridley Scott. Oscars 2022: Will Smith Wins Best Actor Trophy for King Richard; Apologises for Punching Chris Rock (Watch Video).

In GI Jane, Demi Moore played Lieutenant Jordan O'Neil, who happens to be the first woman to undergo an army training that was ripped off US Navy SEALs programme. The movie had her character shorn her hair off to look like a GI (hence the lowly joke made by Chris Rock on Jada's hair).

GI Jane was considered a disappointment in the careers of both Moore and Scott, with the movie receiving poor reviews and even tanking at the box office. Moore even won the Razzie Award for Worst Actress the next year. Who thought this movie that came out in 1997 would then go on to be a part of an infamous scandal on Oscars stage 25 years later! That too when Ridley Scott failed to grab a nomination for his amazing The Last Duel.

Interesting there was another movie called GI Jane that came out in 1951, directed by Reginald Le Borg and starring Jean Porter in the lead. Unlike the Demi Moore-starrer which was a gritty war film, this was a musical.

So Why Was Will Smith Pissed?

We are not sure whether Chris Rock knew about it or not, but the reason Jada Pinkett Smith had a nearly bald pate is because she is suffering from autoimmune disorder alopecia. The actress had come out in the open about it last year in an Insta post, where she wrote, "Now at this point, I can only laugh… y’all know I’ve been struggling with alopecia. Just all of a sudden, one day…it just showed up like that. Now, this is going to be a little bit more difficult for me to hide. So, I thought I’d just share it so y’all not asking any questions…Mama’s gonna have to take it down to the scalp so nobody thinks she got brain surgery or something. Me and this alopecia are going to be friends … period!" After Will Smith-Chris Rock Slap Incident at Oscars 2022, Indian Fans Reminded of Ashutosh Gowariker Slamming Sajid Khan During an Awards Night (Watch Viral Video).

So when Rock made a joke on her hairstyle, it came across as insensitive for the Smith's, triggering the King Richard actor to go on stage and assault the comedian. This isn't the first time Chris Rock had made a joke on Jada though. While he was hostings Oscars 2016, the comedian had joked about Jada boycotting the Oscars because no Black person was nominated that year. He had said, "You can’t boycott something that you’re not invited to." Whether Will Smith's reaction was justifiable or not, we will leave upto the good sense of our readers.

(The above story first appeared on LatestLY on Mar 28, 2022 01:11 PM IST. For more news and updates on politics, world, sports, entertainment and lifestyle, log on to our website latestly.com).