Penn Badgley Birthday Special: Instagram Pictures of the Actor that Will Prompt You to Stalk Him on Social Media

For the ones who love his crazy self, this one's going to be a happy ride. Enjoy these absurd clicks of his with an occasional dash of handsomeness to it. 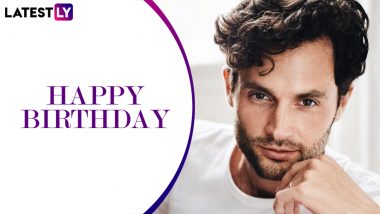 Penn Badgley celebrates his birthday today and besides re-watching Gossip Girl once again, we decided to pick some pictures from his Instagram account that you can drool over. Our beloved Dan Humphrey, who eventually wins Serena Van Der Woodsen over is a charming actor whose unconventional looks make us go weak in our knees. He grabbed our eyeballs with his stint in CW's popular teen drama and later left us stunned with his stalker character Joe Goldberg in Netflix's You. Netflix Series 'YOU' Fame Penn Badgley is Totally Against Romanticizing Stalking But Bollywood Filmmakers Are Cool With It!

Two of Penn's most popular characters have managed to impress the viewers in us. One look at his Instagram account and you are convinced that he's a crazy fellow but even his quirky antics look charming. His pictures aren't the ones we usually click and they have a dose of some quirky element to them. For the ones who love his crazy self, this one's going to be a happy ride. Enjoy these absurd clicks of his with an occasional dash of handsomeness to it. Penn Badgley and Wife Domino Kirke Expecting Their First Child.

Not Typical As We Said

A beautiful Dormeuil wool #bespokesuit made by my friend Craig @robinsonbrooklyn whose shop I used to live above. Why now, of all times, to post something like this? Bc Craig asked me to. Sup Craig. ALSO consider everything we do before & after we vote is a decision to spend time, energy or money. I know exactly where it’s going with @robinsonbrooklyn and his is a small business I want to support. Thanks again, Craig! #pinksocks

He's that Crazy Felloou Fall in Love With

You know what, on tour, we see gender inclusive restrooms EVERYWHERE we go, and signs openly welcoming all kinds, most of all in North Carolina--where it's supposed to be the opposite, according to the declarations of politicians and "the law". It occurs to me now that despite the fear mongering and anti- laws being passed, the inevitable recognition of injustices & inequalities is bringing about a deeper, subtler, more REAL reality unfurling around us. It might be wearing an ugly mask for the time being, but our reality is progress no matter what our demagogues proclaim. It's developing, here & now, and it's actually inclusive & tolerant, regardless of the "law". It flies in the face of the law, straight up. It abides by a truer law of the spirit, this reality, more every day. At the moment, striving to see what's good in the world, I view this as genuinely better than the mere absence of prejudiced laws, because that absence still allowed prejudice to flourish comfortably. Now, in the face of hate that has always existed, people are choosing to declare their tolerance and acceptance rather than being silently complicit in an intolerant world.

Blast from the Past

While we are eagerly waiting for Netflix to announce the release date of season 3 of You, let's hope the actor has more such exciting endeavours in future. Happy Birthday, Penn. Have a great one.

(The above story first appeared on LatestLY on Nov 01, 2020 09:00 AM IST. For more news and updates on politics, world, sports, entertainment and lifestyle, log on to our website latestly.com).