Sacha Baron Cohen Reveals His Identity to Guest on Borat 2, Gets Sued Anyway 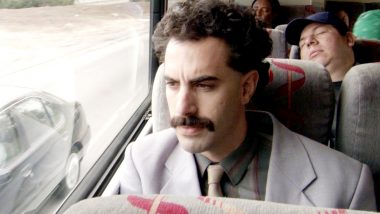 Sacha Baron Cohen might be in legal trouble due to one of his interviews for his mockumentary. The comic actor films interviewees without letting them on in with the secret that it is being shot for a film. For Borat 2, called Borat Subsequent Moviefilm, Sacha interviewed a Holocaust survivor, Judith Dim Evans, for a satirical scene in the film, where he used anti-semitic language. Now, as per Deadline, out of respect, Sacha had a crew member tell Evans and her friend that the Sacha was an actor pretending to be this ignorant character. Borat Subsequent Moviefilm Trailer: The Sequel Of Sacha Baron Cohen's Film Is Ready To Release And It Looks Interesting (Watch Video).

This was the first time when Cohen broke his rule of not telling his guests about the reality of the interview. However, Evans passed away between the filming of the scene and the release of the film. Now, her estate has filed a lawsuit against the actor claiming that Evans did not know that she's appearing for a satire "mocks the Holocaust and Jewish culture."

Although, Deadline reports that Cohen's team informed her about nature and the context of the scene after shooting it and the makers have it on record. Sacha Baron Cohen Birthday Special: The 7 Most Outrageously Funny Lines Uttered by the Actor.

Reports also suggest that Cohen has dedicated the film to Evans. He has also set up a website for Evans in her honour. The actor is also reported to have found a way for Evans' story to appear on Amazon Prime apart from the feature.

(The above story first appeared on LatestLY on Oct 17, 2020 05:57 PM IST. For more news and updates on politics, world, sports, entertainment and lifestyle, log on to our website latestly.com).