Star Wars: The Rise Of Skywalker Fails To Impress At China Box-office, Lands On Fourth Spot Behind Home-grown Films

Star Wars: The Rise of Skywalker is the latest film in the franchise. Directed by JJ Abrams, the movie stars Daisy Ridley and John Boyega. The movie has failed to impress the audience at the Chinese box-office. 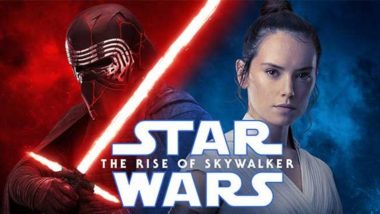 Star Wars: The Rise of Skywalker is the latest film in the franchise. Directed by JJ Abrams, the movie stars Daisy Ridley and John Boyega. The movie has failed to impress the audience at the Chinese box-office. As per a report by The Hollywood Reporter, the movie opened on the fourth spot with a collection of $1.6 million (RMB11.6 million). The movie failed to beat the opening day figures of Rian Johnson's The Last Jedi ($42.5 million in 2017) and Abrams' own The Force Awakens ($124 million in 2015). More audience picked to watch Donnie Yen's Ip Man 4: The Finale, which earned  $7.2 million on first day. Star Wars: The Rise of Skywalker Has the Franchise's First Lesbian Kiss.

The second place at the Chinese box-office was acquired by Sheep Without a Shepherd with $3.1 million (RMB 22 million). Only Cloud Knows, a romantic tragedy is on the third position at the box office. Was this a bad time for Star Wars to open in Chinese theatres with 3 anticipated home-grown movies opening with it? Or is The Rise of Skywalker just that bad that it could not draw enough people to the theater. More on that later. Disney Sends Out Warnings To Theatres Ahead Of The Release Of Star Wars: The Rise Of The Skywalker And It's For A Noble Cause.

Our in-house film critic, Sreeju Sudhakaran was not very impressed by the movie. He called the movie the underwhelming entry in the franchise in his review. He wrote, "Star Wars: The Rise of Skywalker is everything that Star Wars fans want from the film. And yet, it still results in being one of the most underwhelming films of the franchise, not exactly helping the sequel trilogy justify its existence. Other than to mint more money for the overtly rich Walt Disney Co, of course." The movie has a rating of only 58% on Rotten Tomatoes. Ouch. But the audience score, at the moment, is 86% which is a good sign for the JJ Abrams film.

(The above story first appeared on LatestLY on Dec 20, 2019 05:29 PM IST. For more news and updates on politics, world, sports, entertainment and lifestyle, log on to our website latestly.com).