While the actor has had many inspiring outings, Rocky Balboa still remains one of his best. A classic soundtrack fused with Rocky training and inspiring everyone around him, the films to this date still manage to evoke some feelings that no other sports drama has been able to. 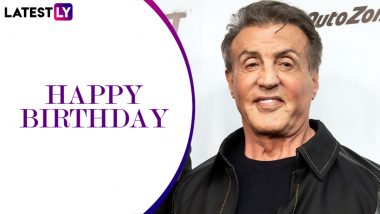 Sylvester Stallone is one of those retro actors that you just can’t forget about. Having one of Hollywood’s best rags to riches story, Stallone is a true inspiration on an off screen. With massive roles like Rambo and more in his filmography, he is a true action star of the golden age of cinema and really gave some of the greatest films to grace the big screen. Sylvester Stallone Birthday Special: 7 Essential Sly Movies That No Hollywood Buff Should Miss!

While the actor has had many inspiring outings, Rocky Balboa still remains one of his best. A classic soundtrack fused with Rocky training and inspiring everyone around him, the films to this date still manage to evoke some feelings that no other sports drama has been able to. So, to celebrate Sylvester Stallone’s 76th birthday, let’s rank all six training montages of the star from the original Rocky films.

Rocky V was one of the biggest missteps of the franchise. So much so to the point where even the training montage felt lackluster. Featuring Rocky train a new boxer under his wing, Tommy Gun, Rocky V just lacked that charm of the franchise. This scene in particular makes it clear.

From Rivals to Friends (Rocky III)

Training to fight Mr T himself, Rocky enlists the help of Apollo Creed to defeat Clubber Lang. In one of the best moments of the franchise, you see these rivals turn into the best of friends, and it features an endearing embrace at the end.

When Rocky is all set to face off against Apollo Creed for the second time, he is not fighting to go the distance with him, but he is fighting to take the belt. From Mickey’s hard love to Rocky sprinting with a huge crowd behind him, this a scene that will have you cheering.

The original Rocky is one of the most inspiring sports-drama that you will ever come across. At the heart of it, it’s just about a guy trying to do his best, and the training montage captures it perfectly. With the iconic theme being introduced to us, this scene is an all-timer.

With an older and more jaded Rocky, the sixth film saw him get back into the ring for one final fight. The training montage here encapsulates everything great about this franchise as it showcases what you’re capable of and inspires you to go beyond your limits.

Rocky IV is the most 80s film to ever exist and there is no denying that. With this basically being a grudge match, Rocky travels all the way to the snowy mountains of Russia to train for the fight and avenge his best friend. Great parallels are present here too as it almost feels like Rocky is going against a machine in Dolph Lundgren’s Drago. Sylvester Stallone Birthday Special: Ranking All Six Original Rocky Movies of the Hollywood Star From Worst to Best.

With Sylvester Stallone’s inspiring work on this franchise, he gave us a character that we can all go back to and learn a few things from. With this, we finish off the list and wish Sly a very happy birthday.

(The above story first appeared on LatestLY on Jul 06, 2022 11:00 AM IST. For more news and updates on politics, world, sports, entertainment and lifestyle, log on to our website latestly.com).