The Kardashian Clan Venture Into a New Business of Greeting Cards and Calendars, Name It ‘Kardashian Kards’!

The Kardashian clan, who already own several business ventures, is now stepping into the world of greeting cards and calendars. Kim Kardashian West, Kourtney Kardashian, Khloe Kardashian, and Kris Jenner filed trademark documents with the United States Patent and Trademark Office for the brand name 'Kardashian Kards' on February 22, 2021. 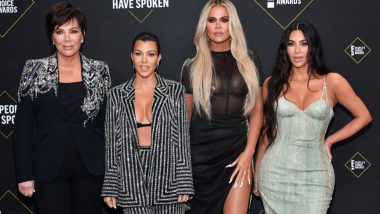 The Kardashian clan, who already own several business ventures, is now stepping into the world of greeting cards and calendars. As per People Magazine, the new venture will be called Kardashian Kards and the family has filed trademark documents to secure a name for it. The popular family is planning on using their name to sell greeting cards, calendars, decals, photo albums, and postcards. The Kardashians Looking to Get into Greeting Card Business with ‘Kardashian Kards’.

Kardashian Kards is far from the first brand name the family has trademarked. In addition to being reality TV stars, the Kardashian-Jenners have a plethora of businesses under their names, most overseen by Kris. One of the earliest was DASH, a boutique clothing chain Kourtney, Kim, and Khloe opened together in Calabasas, California, in 2006, one year before 'Keeping Up with the Kardashians' premiered. Kim Kardashian Opts To Divorce Kanye West: Twitterati Churn Out Funny Memes and Jokes on #Kimye’s Separation News.

The family gained prominence after starring in their own reality series 'Keeping Up With The Kardashians', which has been on the air for over 13 years now. Currently, Kim runs the beauty empire KKW Beauty and shapewear company SKIMS, Kourtney focuses on her lifestyle website Poosh and Khloe has her size-inclusive fashion brand Good American.

Their younger siblings followed suit. Kylie Jenner has taken the makeup and skincare industries by storm with Kylie Cosmetics and Kylie Skin and Kendall Jenner announced earlier this year that, in addition to modelling, she was entering the spirits business, with the launch of 818 Tequila.