Filmmaker Lilly Wachowski, co-creator of 'The Matrix' franchise, has hit back at Tesla CEO Elon Musk and US President Donald Trump's daughter Ivanka Trump for quoting her movie. 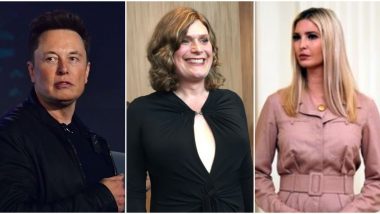 Los Angeles, May 18 (PTI): Filmmaker Lilly Wachowski, co-creator of The Matrix franchise, has hit back at Tesla CEO Elon Musk and US President Donald Trump's daughter Ivanka Trump for quoting her movie.

In a cryptic Twitter post over the weekend, Musk wrote, 'Take the red pill' with an emoji of a red rose. Ivanka retweeted the post, writing 'Taken'. Elon Musk Has The Chillest Reply to California Lawmaker Lorena Gonzalez's Tweet 'F*ck Elon Musk' After Threatening to Move Tesla Out of State.

The tweet referred to the classic scene from the 1999 sci-fi thriller, in which Lawrence Fishburne's Morpheus tells Keanu Reeves' protagonist Neo that he has been living in a computer simulation and gives him a choice to take a blue pill and forget about the Matrix or take a red pill to learn the truth about the Matrix.

Wachowski was seemingly unhappy with the Twitter interaction between Musk and Ivanka, and shot back at the duo saying “F*** both of you.”Matrix 4: Keanu Reeves and Other Cast Members Sign an Eight-Week Extention With a Hope to Resume the Shooting in July.

Fuck both of you

She also responded with a tweet to support the Brave Space Alliance, which is the first Black-led, trans-led LGBTQ Center located on the South Side of Chicago.

Her sister, Lana Wachowski is writing and directing “The Matrix 4” which stopped production due to the coronavirus pandemic. PTI