The legendary band played the first albeit unofficial show of their 2021 No Filter Tour at a private event on Monday night, reports Variety.com. "This is the first show of our 2021 tour, so this is it, this is the tryout." 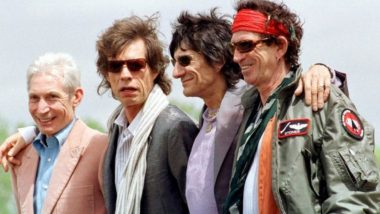 The Rolling Stones paid tribute to their drummer Charlie Watts during their first show after his death. The legendary band played the first albeit unofficial show of their 2021 No Filter Tour at a private event on Monday night, reports Variety.com. "This is the first show of our 2021 tour, so this is it, this is the tryout." "I must say though, at this point it's a bit of a poignant night for us because it's our first tour in 59 years that we've done without our lovely Charlie Watts," frontman Mick Jagger said to the crowd between bits of applause. The Crown’s Tobias Menzies Dedicates His Emmy Win to Late Actor Michael K Williams.

"We all miss Charlie so much. We miss him as a band, we miss him as friends, on and off the stage." Organized by New England Patriots owner Robert Kraft, the small concert took place at Gillette Stadium in Foxboro, and was their first show since the death of drummer Charlie Watts on August 24. It also marked touring drummer Steve Jordan's debut with the band. Sonakshi Sinha Looks Absolutely Stunning As She Debuts New Hair Look on Her Latest Instagram Post!

Accordingly, the band took some time during the show to pay tribute to their late drummer, dedicating the show to him. In a video Mick Jagger posted to his Twitter on Tuesday, the frontman can be heard giving a heartfelt speech honouring Watts. Jagger ended the dedication with a toast: "We've got so many memories of Charlie, and I'm sure some of you that have seen us before have got memories of Charlie as well.

And I hope you will remember him like we do. So we'd like to dedicate this show to Charlie. Let's have a drink to Charlie!" The Rolling Stones' 2021 tour officially begins on September 26 in St Louis.

(The above story first appeared on LatestLY on Sep 22, 2021 07:56 PM IST. For more news and updates on politics, world, sports, entertainment and lifestyle, log on to our website latestly.com).