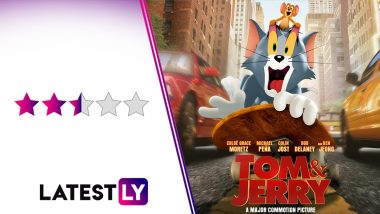 Tom & Jerry Movie Review: Like many of the '90s kids, Tom and Jerry cartoons had been a crucial part of a phase of my life, right into my late teenage years. There was something very innocuous about cartoon specials that even made what could be deemed as uber-violence (but never fatal) between two permanent frenemies into a persistently amusing fun-time. Sadly, like many of the classic animated characters, Tom & Jerry never retained the same grasp on the younger generation as they had entwined us. Which is why Tim Story's live-action movie based on our favourite squabbling cat-n-mouse duo can be seen as a reboot to our childhood days. Warner Bros' 'Tom & Jerry' Movie Set to Release in India in English, Hindi, Tamil and Telugu.

Only that it partly works that way. For 2021's Tom & Jerry the movie isn't just about our furry friends, it becomes about a hotel in New York that is about to host a grand Indian wedding of a a billionaire couple, Preeta (Pallavi Sharda) and her American boyfriend Ben (Colin Jost). It is also about Layla (Chloë Grace Moretz), a young girl who manages to circumvent dubious references to swindle herself a job at the hotel, much to the chagrin of her supervisor, Terrence (Michael Pena).

Tom and Jerry, now rendered homeless, make their way to the Big Apple. While Jerry manages to sneak his way into a plushy stay in the hotel, Tom is left to fend for himself in the street. With the hotel readying itself up for the big grand wedding - that brings its own problems between the couple - the presence of a mouse in their establishment is not something the management wants to make it to social media.

So Layla, who professes herself to be having a knack with animals, is tasked to catch Jerry, and she, in turn, recruits someone whose lifetime ambition has been that - Tom. Which, of course, means nothing is gonna go anyone's way, as Tom and Jerry's chases and fights nearly bring the hotel down.

Tom & Jerry is decent enough kiddie flick that has elements of nostalgia for the adults who walked in with their children to the screens. The best portions, of course, in the film are any scene with our favourite toons in it, and thankfully, the makers retain their 2D charm, instead of trying to make them errr... too realistic. Something that also worked for a (reworked) Sonic The Hedgehog. It was also hilarious to see the film try and input some fan theories and callbacks. Like, the ambiguity around Jerry's gender. Chloë Grace Moretz Birthday: Simple But Charming, Her Style File is a Winner.

What doesn't always work are the live-action elements in this live-action movie, which is the human subplot. The subplot isn't completely bad- it has some nice moments, and the acting is too good. Especially Moretz who puts up a likeable bubbly act, even when we know she is mostly interacting with green-screen. Michael Pena is entertaining as always, and Pallavi Sharda and Colin Jost make their characters' emotional conflict relatable enough. Overall, though the focus on the human story drags down the fun factor of seeing Tom having a go at the Jerry, which isn't, strangely, much.

Thankfully, the third act manages to get its 'act' right, especially from the portions revolving around the wedding. The human story feels better in this part, and we get an emotional, decent enough conclusion.

Tom & Jerry could have made for completely fun trip down the memory lane, if the human elements don't frequently apply brakes on the trip. Still, it could make the younger audience happy... that is, if you do want to bring your kids to the theatres in these still cautious times.

(The above story first appeared on LatestLY on Feb 19, 2021 03:15 PM IST. For more news and updates on politics, world, sports, entertainment and lifestyle, log on to our website latestly.com).