Tom Cruise's captivating action film made a whopping $86 million on the second weekend since its release on May 27. Blockbusters usually tend to drop at least 50 per cent after their opening weekend, but not Top Gun: Maverick that has the smallest second-weekend decline for a movie that made $100 million or more after its release. 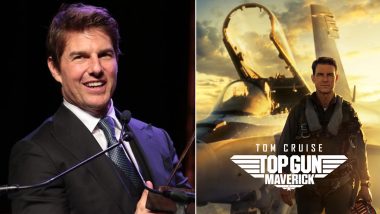 At the international box office, the Paramount and Skydance release has eclipsed $257 million, bringing its global tally to $548 million, substantially more than its production budget of $170 million. Even by pre-pandemic standards, notes Variety, Maverick is flying high at the box office.

In India, however, according to trade reports, it has managed only Rs 21.7 crore, despite releasing in more than 1,500 screens.

On the contrary, in North America, thanks to positive word of mouth, rapturous reviews and premium screens, ticket sales for Top Gun: Maverick dropped a scant 32 per cent from its $160 million debut over the long Memorial Day holiday weekend, reports Variety.

It is the smallest second-weekend decline for a movie that opened to $100 million or more, according to Comscore. That is an especially impressive benchmark -- even for a well-reviewed movie -- because blockbusters, such as Maverick, tend to be front-loaded and drop at least 50 per cent after the opening weekend.

By comparison, recent big-budget tentpoles Spider-Man: No Way Home and Marvel's Doctor Strange in the Multiverse of Madness, whose Hindi version, incidentally, is firmly ensconced at No. 2, after RRR, in the Indian market. Top Gun Maverick: On Film’s Release Day, Tom Cruise Tweets ‘We Made It for the Big Screen, for the Fans’.

Each declined by 67 per cent in its sophomore outing, while Robert Pattinson's The Batman fell by 50 per cent in its second weekend. "It has never been more appropriate to say the sky's the limit for Top Gun: Maverick," Paramount's president of domestic distribution Chris Aronson wrote in a note to the press.

(The above story first appeared on LatestLY on Jun 06, 2022 03:04 PM IST. For more news and updates on politics, world, sports, entertainment and lifestyle, log on to our website latestly.com).