Viggo Mortensen Birthday Special: From The Lord of the Rings to Captain Fantastic, Here are 5 of the Aragon Actor’s Best Films Ranked According to IMDb

Viggo Mortensen is an acclaimed American actor who is famous for starring in films like The Lord of the Rings, Green Book and Captain Fantastic 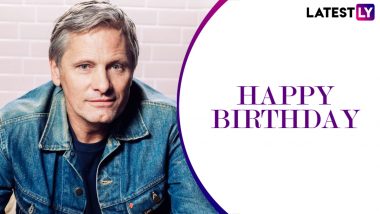 Viggo Mortensen is one of the most celebrated actors in Hollywood and for great cause. He is extremely talented and possesses great talent. Portraying characters that have an internal struggle within them, Mortensen has provided us with many classics. His films have gone from being some of the best fantasy films ever to grace the screen to some intense dramas. Primarily known for his work on The Lord of the Rings, Mortensen through the years shaped his career by working on shorter budget films too. That just really makes his filmography so diverse and unique. Viggo Mortensen Nominated for Oscars 2019 Best Actor Category for Green Book: All about Viggo and His Chances of Winning at 91st Academy Awards.

So to celebrate Viggo Mortensen’s 63rd birthday, we are taking a look at five of his best films ranked according to IMDb.

Captain Fantastic is perhaps the most heartwarming film on this list. Following Ben Cash played by Mortensen, the film focuses on him and his children who try to get by in normal society after living in isolation for a long time. It’s a great story about a father and his children that everyone should watch which is capped off by an amazing ending.

Winner of the Best Film of the Year at Oscars, Green Book is inspired by a true story of Don Shirley and bouncer Frank Vallelonga. It’s an amazing story about friendship between these two men and tackled some great racial themes. Green Book Movie Review: Viggo Mortensen and Mahershala Ali Drive Through Racial Biases in This Endearing Road Trip Dramedy

The Two Towers was an exceptional sequel that provided some great action and raised the stakes of what can be done on film. The story follows Frodo and Sam’s journey while Aragon and others go to Rohan in order to find help. Mortensen plays the role of Aragon and provides a great performance that helped establish him as a leading man.

The start of one of the most revered franchises in fantasy, The Fellowship of the Ring is the beginning of an amazing journey. Focusing on Frodo and his Fellowship who are tasked with destroying the ring, the film had great visual and practical effects. Mortensen plays the role of Aragon who is the heir to Gondor’s throne.

The Return of the King is perhaps one of the best endings to any trilogy to date. Focusing on the war and Frodo’s journey to destroy the one ring, it was a masterclass in filmmaking. Also, the story over here heavily focuses on Aragon which in turn became Mortensen’s best performance to date.

We hope that Viggo Mortensen continues to deliver us deep and layered characters which elevate their respective films. With this we finish off the list and wish Viggo Mortensen a very happy birthday.

(The above story first appeared on LatestLY on Oct 20, 2021 09:41 AM IST. For more news and updates on politics, world, sports, entertainment and lifestyle, log on to our website latestly.com).