WandaVision: Paul Bettany Answers THIS Million Dollar Question about Vision's Penis and You Don't Want to Miss Reading That!

Have you ever wondered if Vision, an android has a penis? The question definitely crossed our minds seeing his romance with Wanda in MCU! If yes, fret not for we have an answer finally. Paul Bettany in his recent conversation answered this query and you definitely want to read it. 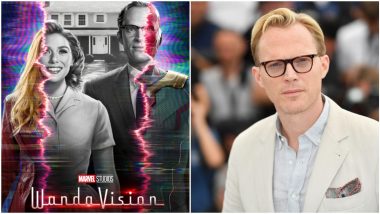 Paul Bettany is gearing up for his Disney+ series, WandaVision wherein he reunites with his co-star and on-screen romantic interest, Elizabeth Olsen. The series is headed for a January 2021 premiere and while we all are excited to see their shenanigans, Paul recently answered a million-dollar question about his character and we are kinda relieved to finally have an answer. Question? If his character, an android has a penis!  In a recent chat with MTV's Josh Horowitz, the duo discussed the topic of Vision's genitalia and the actor was compelled to make certain things clear for us. WandaVision Trailer: Did You Notice This Captain Marvel Character in the First Promo of MCU's Disney+ Hotstar Series?

"Well, here's the thing. I noticed in Watchmen, they go there. It's the size of Manhattan [laughs], it's a fantastic example of an aforementioned penis," he said coyly. When asked if the Disney+ series will have any nudity, the actor said, "No, there is no nudity so to speak, but I think people can answer this question for themselves about whether he does or doesn't [have a penis]. Vision can change his density, so there's that." Oh, and it's purple! Some NSFW details that you may or may not needed to know.  WandaVision Trailer: Elizabeth Olsen and Paul Bettany's Superheroes Struggle to Be a Usual Couple and Live an Ordinary Life (Watch Video).

Leaving the topic behind, Paul then elaborated on his series and explained why and how they have taken some risks with their new show. "I think I can guarantee a few things. I think we took an enormous swing. I think it's gonna pay off. I've never seen Kevin Feige more giddy and excited," he said.

The show will start airing on Disney's OTT platform from January 15, 2021.

(The above story first appeared on LatestLY on Nov 18, 2020 09:10 PM IST. For more news and updates on politics, world, sports, entertainment and lifestyle, log on to our website latestly.com).