Wesley Snipes Birthday Special: From Blade to Dolemite Is My Name, 5 Best Movies of the Actor Ranked by IMDb (LatestLY Exclusive)

Whenever Snipes is mentioned though, the role of Blade is always brought up as he ushered in a new era of comic book films. With his 59th birthday, we are taking a look at five of his best movies ranked according to IMDb. 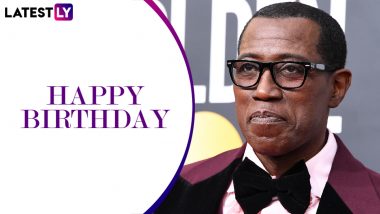 Wesley Snipes has provided us with some really entertaining movies throughout his career. Wesley Snipes is one of the most revered black actors of his generation and a great martial artist at that too. Snipes has often showcased his talents in the field in his films. Sharing the screen alongside Michael Jackson in his music video "Bad", Snipes has enjoyed a great career and is loved by fans. Wesley Snipes Denies Claims That He 'Tried to Strangle' Blade Trinity Director.

Whenever Snipes is mentioned though, the role of Blade is always brought up as he ushered in a new era of comic book films. With his 59th birthday, we are taking a look at five of his best movies ranked according to IMDb.

One of the best comedies of 1992, White Men Can’t Jump had Wesley Snipes and Woody Harrelson in the lead. The duo proved to be one of the best comedy pairings of the year where they starred as Sidney Dean and Billy Hoyle, who are basketball hustlers. White Men Can’t Jump proved that these two actors have serious comedic chops and was a fun time altogether. Coming 2 America Review: Eddie Murphy’s Return As King Akeem Gets Mixed Response From Critics.

In this crime drama, Snipes plays the role of New York detective, Thomas Flanagan. Flanagan is tasked with hunting down the drug lord Frank White who is played by Christopher Walken. What follows is an entertaining crime thriller where both these actors are pitted against each other in an amazing display of performances.

Probably Snipes’ most popular film, Blade starred him as Marvel’s Vampire killer. Blade helped usher in a new era of Marvel films which were followed by X-Men and Spider-Man respectively. Blade is one of Snipes’ most passionate roles and with Mahershala Ali set to play the character next, he has huge shoes to fill in.

This sports comedy film features a band of misfits who are put together to throw the season. It features Snipes in the role of Willie Mays Hayes. Snipes again gets a great opportunity to show off his comedic chops and has some really hilarious scenes in the film.

Starring alongside Eddie Murphy in Dolemite is My Name, Snipes plays the role of real life actor, D’Urville Martin. He holds his own against Murphy and acts as a great addition to this amazing film. If you want to check out all the actors featured over here at top of their game, then Dolemite is My Name is for you.

(The above story first appeared on LatestLY on Jul 31, 2021 09:11 AM IST. For more news and updates on politics, world, sports, entertainment and lifestyle, log on to our website latestly.com).