The much-awaited romantic-comedy titled Coming 2 America finally dropped on Amazon Prime Video on March 4. Directed by Craig Brewer, the story of the movie takes you on the journey of African monarch Akeem, who comes to know that he has a long-lost son in the US. Read on what critics have to say about the flick. 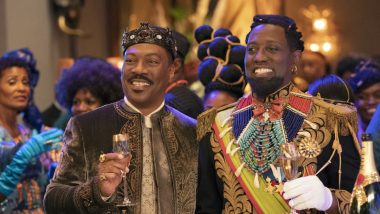 The much-awaited romantic-comedy titled Coming 2 America finally dropped on Amazon Prime Video on March 4. Directed by Craig Brewer, the flick is being bankrolled by Eddie Murphy and Kevin Misher under their respective banner. The story of the movie takes you on the journey of African monarch Akeem, who comes to know that he has a long-lost son in the US. This one stars Eddie Murphy, Shari Headley, James Earl Jones, Arsenio Hall and Wesley Snipes in key roles. Coming 2 America Movie Review: Eddie Murphy’s Sequel Film Prefers Breaking Gender Norms Over Cheap Laughs, and That’s a WIN! (LatestLY Exclusive).

As soon as the film was out, netizens flooded the internet with reviews of the same. Even on the critics front, the film has garnered mixed reviews. However, the only thing which all reviewers have agreed upon is Eddie's amazing performance. Well, in case, you are planning to watch the movie, check out this compiled review below, before going for it.  Eddie Murphy Says Coming to America Sequel Is a Cool Continuation.

"The movie is as tired and middle-aged as Akeem himself; Murphy is oddly waxy and stately, and has no authority figures he can really playoff. The film itself has some pre-emptive dialogue between Lavelle and Mirembe on the subject of whether sequels can ever work: Lavelle thinks the Barbershop franchise was successful, and there is some discussion of whether Queen Latifah’s Beauty Shop spinoff counts, writes The Guardian.

HT calls the flick boring and mentions, "The few moments of amusement are supplied by special appearances from the likes of a beloved actor as an emcee for the King's funeral, an SNL star as a racist job recruiter, and a late-night host as a news anchor. Eddie and Arsenio, with or without the pasty makeup, are bland at best. With a dull script, the two are not given any opportunity to show off the chemistry that helped the first film soar.

"Coming 2 America is a strictly commercial affair, and not even one you can happily turn your brain off to. The musical numbers are akin to whatever ends up on the cutting room floor of a Lil’ Bow Wow album; Teyana Taylor’s seductive dance number is overedited to the point of incomprehensibility. The only spot of scenic redemption lay in Black Panther costume designer’s Ruth E. Carter’s gowns—beautiful gowns indeed," says Vanity Fair.

Terming the flick as a disappointing rehash, USA Today pens, "And instead of spending time digging into the in and outs of his character – an aspect of "Coming to America" that should have been carried over – the new movie’s more intent on shoehorning in other colorful personalities. Sure, it might be a bigger follow-up in different ways, however, it's one that falls well short of being better." Coming 2 America Trailer: Eddie Murphy Returns As King Akeem After 33 Years To Find His Male Heir From New York In This Fun Ride (Watch Video).

IGN India writes, "Murphy remains in fine form, as does Hall. And while there’s little else in this sequel to justify its existence as anything other than a decades-too-late cash grab, there’s something to be said for the simple pleasures of visiting with Akeem and the other inhabitants of Zamunda once again."

Even we at LatestLY reviewed the movie and gave it three stars. Our author's final thoughts read, "Coming 2 America takes a dig at itself when a character calls out Hollywood's tendency to make belated sequels of beloved movies. Thankfully, the sequel doesn't let down the legacy of the original and turns itself into a very likeable entertainer that goes well with the times. Coming 2 America is streaming on Amazon Prime Video." Here is our full review. Stay tuned!

(The above story first appeared on LatestLY on Mar 05, 2021 09:38 PM IST. For more news and updates on politics, world, sports, entertainment and lifestyle, log on to our website latestly.com).