Gal Gadot returns as Wonder Woman/Diana Prince. Interestingly, she is joined by Chris Pine playing Steve Trevor, despite the fact that the character died at the end of the previous movies and the new one is set decades after it. That's where the plot of the film comes in. Here is everything else you need to know about Wonder Woman 1984. 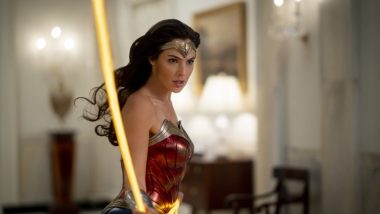 With the pandemic still looming large, theatres across the globe are struggling to reignite the business. DCEU's Wonder Woman 1984 - with Gal Gadot playing the superheroine - is all set to release in many theatres across the world after being delayed multiple times. The movie is also paving way for Warner Bros' controversial hybrid release system where the movie will release on the digital streaming platform, HBO Max, simultaneously with the theatrical release. Wonder Woman was a huge success for the studio, so much so, that Patty Jenkins, the director, became the highest-paid female director in the world for returning to the helm of the sequel. Wonder Woman 1984's Gal Gadot, Chris Pine, Kristen Wiig Recreate Iconic The Breakfast Club Poster (See Pic).

Patty has high hopes for the film. "I want it to be a great time and a great superhero film experience, but I also hope to use our film to add to the conversation in this world about how each of us can find the hero within. That's what this world needs, so I'm so happy to get to be a part of that thought process," she has said in an interview. The movie is estimated to be budgeted at $200 million. Here is everything else you need to know about Wonder Woman 1984. Wonder Woman 1984 Director Patty Jenkins Hopes That the Gal Gadot Film Lets Fans Discover the Hero Within.

Gal Gadot returns as Wonder Woman/Diana Prince. Interestingly, she is joined by Chris Pine playing Steve Trevor, despite the fact that the character died at the end of the previous movies and the new one is set decades after it. That's where the plot of the film comes in. Kristen Wiig joins the cast playing friend turned foe Barbara aka The Cheetah. Pedro Pascal plays the role of Maxwell Lord.

Set decades after the events of the first film, Wonder Woman 1984 has Diana Prince well settled among the humans as she works as a historian at the Smith's museum. She also tries to fight danger whenever she can trying to conceal her identity as Wonder Woman concealed as much as possible. An artefact, that possesses the power of granting wishes, creates trouble for her and her friend Barbara. Wonder Woman 1984 finds herself fighting against two new enemies, The Cheetah and Max Lord.

Two very interesting trailers for the film have been released over the past year. Watch them below.

The movie opened in over 30 territories, including China, a week before Christmas. To put it lightly, the movie has performed poorly at the China box office. It was defeated by the Chinese movie, The Rescue. Wonder Woman 1984 opened to an underwhelming $18.8 million in China on Saturday. For comparison, Wonder Woman (2017) had opened with $38 million at the Chinese BO.

The social media reactions from the critics, when the social media embargo was lifted, were overwhelmingly positive. However, when the full reviews came out, it was a mixed bag. The film has not received any reviews that slammed it like a one-star movie, but some critics noted that it 'loses some of the original's glory', 'it doesn't have enough action', 'an overstuffed sequel', has 'an empty pit of ideas', etc.

But Wonder Woman 1984  received many positive reviews which said it is 'all heart', the 'superheroine that 2020 needs', 'escapist superhero sequel that whisks us away from real-world disaster', 'vibrant and virtuous adventure', etc.

(The above story first appeared on LatestLY on Dec 22, 2020 04:00 PM IST. For more news and updates on politics, world, sports, entertainment and lifestyle, log on to our website latestly.com).