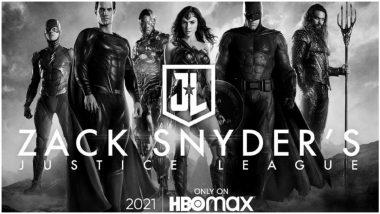 HBOMax users were in for a shockingly pleasant surprise when they got to watch 1 hour of Zack Snyder's Justice League while attempting to screen the latest live-action Tom & Jerry movie. The four-hour-long movie is scheduled to release on March 18 and so, this leak comes as a surprise for many. Hollywood Reporter revealed that a user watched the new Justice League movie for an hour before it was abruptly halted. Later, when the user tried to access more of it, Tom & Jerry was played. Zack Snyder’s Justice League Trailer: Batman, Superman, Wonder Woman and Other DC Superheroes Team Up for Some Action, Joker Adds Hint of Evil (Watch Video)

HBO Max released a statement, as accessed by Hollywood Reporter, saying "Zack Snyder’s Justice League was temporarily available on HBO Max and the error was addressed within minutes." Quite obviously Twitter went wild when that happened with people trying to understand how the error happened. Some were happy to get a sneak-peek but there were also those who were quite miffed at this mistake by the streamer.

Ray Fisher who plays Cyborg, reacted to the leak with a winsome attitude

You know what beats a leak?

A flood of views on @hbomax!

WB be like the Snyder Cut of Justice League is so shit, let’s leak it under Tom & Jerry’s name. pic.twitter.com/MXTvGNUrgy

Someone is really made here

Zack Snyder did NOT go through what he went through with WB, and his grief, to then spend 6 months to work in tandem with his other projects to get Justice League ready for next week for people to leak and spoil things on social media. Fuck ya'll. I'm so mad on his behalf.

Yes, that's how you stop fake news from spreading too

The justice league leaks don't even look bad at all, people need to accept its not gonna be marvel. I'm so stoked for next week to see the real justice league.

Now we don't know if it was accidental or HBOMax wanted to create more buzz about it. But we are sure fans of the film will still watch it again on March 18.

(The above story first appeared on LatestLY on Mar 09, 2021 09:40 AM IST. For more news and updates on politics, world, sports, entertainment and lifestyle, log on to our website latestly.com).