Zack Snyder’s Justice League: Not As Mini-Series, Snyder Cut To Release as a Four-Hour ‘One Shot’ Movie on HBO Max! Here’s All You Need To Know 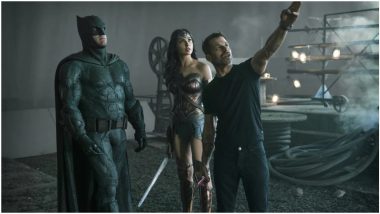 The earlier report about Justice League's Snyder Cut was that the the film would be divided into four parts and would be released as a mini-series on HBO Max. Now that plan has seen some alteration as per the director himself. While interacting with fans on social networking site called Vero, Snyder was asked by one fan if he would be releasing his version as a series or a one-shot movie. To which, he replied that it would be just 'one-shot'! Justice League Fans Call For Warner Bros To Restore The Snyder Verse By Trending It On Twitter.

This would be great news for fans, who may not have to wait each week for the new episode to drop on HBO Max, and they could lap up the four hour magnum opus at one go. As per some reports, The Snyder Cut could also see an IMAX release, though it has not been confirmed yet by the studio.

Zack Snyder's Justice League is coming to light thanks to an incessant fan campaigning, that demanded they see the director's original version of the film. Snyder had to leave the production of the film midway to attend an urgent personal matter, and the studio hired Joss Whedon of The Avengers fame to take over.. They got Whedon to reshoot most of the film, and allegedly changing Snyder's take, resulting in the most poorly received film in DCEU. Forget Justice League Snyder Cut! 11 Bollywood Movies Whose Director’s Cut Fans Should Start Campaigning for Right Now!

Snyder has been claiming that his version of Justice League was very different from what we got, though he himself has not seen what Whedon has done to Justice League. Warner Bros finally agreed to release Snyder Cut straight to HBO Max, and allowed Snyder to reshoot certain portions. Snyder also went on to add two new scenes, one involving a returning Jared Leto as Joker. During the DC Fandome, the makers released the first trailer of Zack Snyder's Justice League, that revealed new scenes and footage.

(The above story first appeared on LatestLY on Jan 18, 2021 10:03 AM IST. For more news and updates on politics, world, sports, entertainment and lifestyle, log on to our website latestly.com).