Zayn Malik Fans, Hear Us Out! You Can Now Call the Singer As He Drops His Phone Number on Twitter

Zayn's tweet went viral in no time and fans dropped comments on his post asking if this was for real. Gigi Hadid dropped a comment talking about the extensions that his fans could use to call him as well. 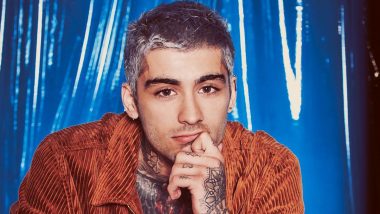 Zayn Malik is celebrating his 28th birthday today and he dropped a massive surprise for his fans on this special occasion. The singer dropped his phone number on Twitter without saying anything about it. Seeing the phone number made his fans go crazy and made them wonder if that number was actually Zayn’s personal number. This is not the first time a celebrity has dropped their phone number for the fans to talk to and Zayn's fans were curious to find out if it was a way for them to talk to him finally. It’s Zayn Malik’s Birthday! Fans Share The Singer’s Photos And Extend Heartfelt Wishes To Him On Twitter.

Zayn's tweet went viral in no time and fans dropped comments on his post asking if this was for real. Gigi Hadid dropped a comment talking about the extensions that his fans could use to call him as well. The users naturally tried calling the number only to find out that Zayn was actually talking to them but only to promote his new album. This was just an ingenious way to promote his upcoming music album Nobody Is Listening.

Let us tell you what happens when a person dials the number. Zayn’s voice is heard acknowledging the caller when the call is picked. The voice says, “Yo, this is Zayn here. Album is dropping on January 15. Press any number from one through nine to get to meet me. Press it now.” Once the caller presses the number, they get a sneak peek at his upcoming album Nobody Is Listening. Fans Can't Believe Zayn Malik Tweeted After 17 Days About A Harry Potter Game Instead Of Baby Birth Announcement Or Z3.

Not just that, the caller also receives a message that says, “Yoo, Zayn here! Tx for hitting my line. Give me your dates so we can stay in touch.” The message also has two links attached to it. The first link is to pre-order the album whereas the other one is to save his number. Nobody Is Listening will be releasing on January 15. Zayn had previously released his songs Vibez from the album. The album has 11 songs in total.

Zayn Malik released his new song Vibez two years after he released his last album Icarus Falls. The new song marks the second song of his third studio album Nobody Is Listening and is also the follow-up to his single Better. Malik had earlier in September 2020 welcomed his first child with his supermodel girlfriend Gigi Hadid.

(The above story first appeared on LatestLY on Jan 12, 2021 02:31 PM IST. For more news and updates on politics, world, sports, entertainment and lifestyle, log on to our website latestly.com).