American actor Janina Gavankar, who has been Meghan Markle's close friend for 17 years now, spoke out in support of the Duchess of Sussex after her tell-all interview with American talk show host Oprah Winfrey. 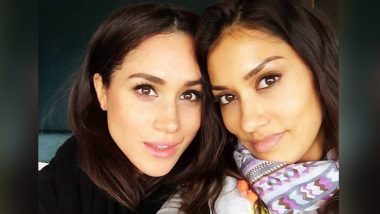 American actor Janina Gavankar, who has been Meghan Markle's close friend for 17 years now, spoke out in support of the Duchess of Sussex after her tell-all interview with American talk show host Oprah Winfrey. As per People magazine, Janina recently opened up about Meghan and Prince Harry's interview. She also said that Meghan's struggles, which the former 'Suits' actor discussed with Oprah, were well-known within the royal family. Jameela Jamil Takes Dig at Piers Morgan After His Controversial Comments About Meghan Markle.

The actor, who candidly spoke at length about the claims made by Meghan, also said there are enough 'texts and emails' to prove their side of the story.

"We watched the special together actually," Janina told the British show 'This Morning' on Wednesday. She added, "We're all happy that we are in a new era. You know, we get to tell the truth. Things are different now. It is nice to see them feel free." Piers Morgan Quits ITV’s Good Morning Britain After His Remarks on Meghan Markle and Prince Harry.

During her conversation, Janina candidly spoke about the mental anguish that left Meghan feeling as though she "just didn't want to be alive anymore."

According to Janina, Meghan "turned to all of us. She turned to her husband," when she couldn't secure the help she needed from within the royal family. The actor added that Meghan's struggles were also well-known within royal circles.

"I don't know who knew. But I know that the family and the staff knew. We watched as a wall was built around her. Meghan was very isolated and even though that wasn't her choice she was being completely slaughtered for it," Janina said about seeing her close friend go through such turmoil. She continued, "I can personally say that made me very angry. I wanted to defend her, but she was told to tell us never to make a comment because the institution would protect them. And years later we see now that was not the truth."

Janina added, "Meghan has always been a very open person. She's always shared parts of herself in a way that we always do, but that all changed when she joined the family." Janina also hinted that despite this attempt to build bridges, it is likely that further details about the behind-the-palace-walls events will emerge at some point. The actor also said Meghan and Harry have plenty of ways to prove their side of the story.

"You know, after reading this short statement that came out from Buckingham Palace today, I felt two things. On one side, I thought: I am so thankful that they are finally acknowledging the experience. But on the other side, I know that the family and staff were well aware of the extent of it, and though their recollections may vary, ours don't, because we lived through it with them. And there are many emails and texts to support that," she said.

Janina also provided her thoughts on the bullying accusations brought against Meghan by former aides who worked with her at Kensington Palace. "I have known Meghan for 17 years and I have seen the way she regards the people around her and the people she works with, and I can say she is not a bully. But I can also say that I am personally glad people are doing their due diligence because I also know why someone had to leave, and it was for gross misconduct," Janina added.

Janina further said there are plenty of 'emails and texts' for Meghan and Harry to support their claims. "The truth will come out. There are plenty of emails and texts about that. I'm not going to get into the details of it. I don't feel like that's my place. I'm just happy that it's actually being looked into because the truth really does set you free," Janina said. In a nod to what the future might hold for the Duke and Duchess of Sussex, Janina said the couple can now concentrate on the work that brought them so close in the first place, adding that Meghan found her "soulmate" in Harry.

"Now they can get back to what they really were focused on and really how they really met and fell in love, and that was through humanitarian and environmental work," Janina said. Meghan and Harry's CBS special with Oprah marked the couple's first joint interview since their royal exit, which was recently made permanent. In the interview, the duo discussed the reasons behind their decision to step back from their royal duties, which they had first announced in January 2020.