Neelam Kothari Reveals Why She Got Her Fillers Done on Camera in Fabulous Lives of Bollywood Wives, Says ‘It Is Going to Help Other Women’

Neelam Kothari in her latest interview opened up about how everyone goes through the ageing process. She also mentioned that why she went the anti-ageing treatment way on camera in Fabulous Lives of Bollywood Wives, as according to her it is going to ‘help other women’. Read on. 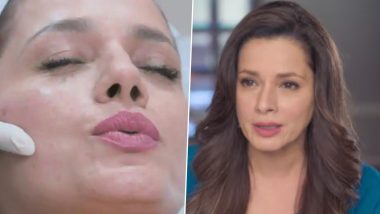 Netflix's docu-drama Fabulous Lives of Bollywood Wives gave us a sneak peek into the everyday happening of four star wives Neelam Kothari, Maheep Kapoor, Seema Khan and Bhanava Pandey. Right from the goss about Neelam making a comeback to showbiz once again to Maheep's badass attitude, the cringe-worthy show is indeed a guilty pleasure of sorts. FYI, Neelam was quite a popular face in Bollywood during the 80s and 90s. In the show, we also saw her getting fillers to look younger. Fabulous Lives Of Bollywood Wives Twitter Review: Neelam Kothari, Maheep Kapoor, Seema Khan and Bhavana Pandey's Netflix Show Gets Heavily Trolled For Its Head-Spinning Content!

Now, in a conversation with Bollywood Hungama, Neelam opened up about how everyone goes through the ageing process. Ahead, she also mentioned that why she went the anti-ageing treatment way on camera on the show as according to her it is going to  ‘help other women’. Fabulous Lives of Bollywood Wives Trailer: This Netflix Show Is Giving Us Quite A Keeping Up With the Kardashians Vibe (Watch Video).

“I have no problem saying I am 50. I know that other women out there have had conversations with friends. Everyone is going through this ageing process. Whether in their minds or they are discussing it with their friends, they all want to look good and they don’t know what to do. So I told the creative team that I, myself, am going through this. I want to get something done but I am scared. I said I want to get a filler done. Very little, obviously. I asked if they wanted to capture it and they jumped at it," Kothari said. Fabulous Lives of Bollywood Wives Review: Bhavna Panday and The Men Try To Redeem This Inane Excuse Of A Show (LatestLY Exclusive).

She added, “I just feel that why not? People lie about it and they hide it and say, ‘Oh, I don’t do anything,’ which is their prerogative. But I feel there is nothing wrong with going out there and being honest about it. Why not? I just feel it is going to help other women."

On Fabulous Lives of Bollywood Wives, Neelam's comeback was discussed in all the episodes, making it sound as if the actress really wants to make it to the big screens. We also saw Kothari seeking advice from Ekta Kapoor and Raveena Tandon with regards to her career. Neelam is married to Samir Soni. Stay tuned.

(The above story first appeared on LatestLY on Dec 11, 2020 08:44 PM IST. For more news and updates on politics, world, sports, entertainment and lifestyle, log on to our website latestly.com).