Nickelodeon Kids Choice Awards 2020: Sushant Singh Rajput’s Chhichhore Bags an Award, TMKOC Emerges As the Winner for the 6th Time in a Row 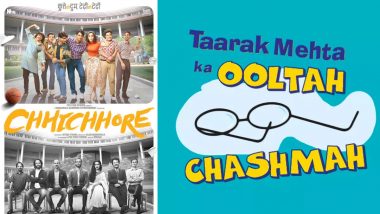 With 2020 now over, we saw many award night happening virtually, all thanks to the pandemic. The Nickelodeon Kids Choice Awards 2020 will also take place virtually for the first time while the nominees for these awards were selected through a special online research as well.  The awards let kids decide their heroes from the nominations and no other jury is involved in the process and the results of the same are finally here. The team announced kids' favourites across film, television, sports and digital and many big names bagged different awards at this one-of-a-kind extravaganza. Nickelodeon's Kids' Choice Awards 2020 Postponed Due to Coronavirus Scare.

Apart from this, Badshah bagged the title of the Best Rapper / Rap music while kids voted for Ashish Chanchlani as their 'Favorite YouTuber'. On the television front, Surbhi Chandna was honoured with the award of the 'Favorite TV Actor' (Female) for Naagin while it was a hat-trick for Dilip Joshi as he once again bagged the 'Favorite TV Actor' (Male) award this time. PV Sindhu also won an award for the 'Favourite Sportsman' (non-cricket) of the year. MS Dhoni, who has been a favourite of the kids for all these also bagged the award of the 'Favorite Sportsperson' (Cricket). Nickelodeon Kids’ Choice Awards 2019: Kriti Sanon, Bhumi Pednekar, Sara Ali Khan Bring Ruffles, Kartik Aaryan Keeps It Slick!

This time around, Nickelodeon also collaborated with 6 diverse digitally famous influencers to gain more engagement from the kids. This list included Child Actor Aakriti Sharma, actor Palak Sidhwani, Mommy Influencer Nisha Rawal and her adorable son Kavish Mehra, Actor Shantanu Maheshwari. The winners of the awards will gather together virtually on Nickelodeon for a fun and pleasant evening.

(The above story first appeared on LatestLY on Feb 04, 2021 03:09 PM IST. For more news and updates on politics, world, sports, entertainment and lifestyle, log on to our website latestly.com).