Sakshi Tanwar needs no introduction. She is one powerhouse performer who is widely known as television’s Parvati (Kahaani Ghar Ghar Kii) and Priya Kapoor (Bade Achhe Lagte Hain). And as Sakshi turns a year older on January 12, 2021, let's take a look at some lesser-known facts about the actress. Read on. 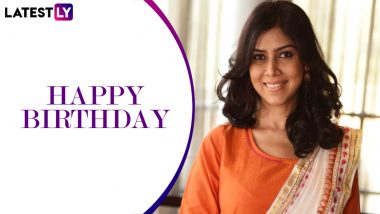 Sakshi Tanwar needs no introduction. She is one powerhouse performer who is widely known as television’s Parvati (Kahaani Ghar Ghar Kii) and Priya Kapoor (Bade Achhe Lagte Hain). In both the daily soaps, she was loved by the audience for her natural acting prowess. But little do many know that, before she starred as TV’s bahu, Tanwar first time faced the camera as an anchor on the Doordarshan channel wherein she hosted a programme namely Albela Sur Mela (1998). However, she didn’t only stick to TV and so, later on, was seen essaying the role of Aamir Khan’s wife Daya Kaur in 2016 blockbuster film Dangal. Drashti Dhami Birthday: Elegant and Edgy, TV's Madhubala Has Always Proved She's A Stunner In The Style Department!

And as Sakshi turns a year older on January 12, 2021, we definitely are in a mood to talk more about her. Even though she has been away from the screen from quite a time, her loyal fans still love and remember her. On this very special day, let's take a look at some lesser-known facts about the actress. Aishwarya Sakhuja Birthday: A Look at the Many Fashionable Six-Yards Flaunted by Yeh Hai Chahatein's Ahana (View Pics).

Before seeing stardom, the actress was quite career-oriented and has worked as Sales Trainee at the Taj Palace hotel in Delhi. She even did a Rs 900 (stipend) job at Khazana. Woah!

Software Engineering Was On Her Mind!

If Sakshi would have not been an actress, she would be a software engineer, as that was her dream job. However, sadly she failed her entrance exams and so switched to acting.

Long back rumour had it that Sakshi Tanwar got hitched to a business tycoon in a secret wedding. However, the actress had rubbished the reports and said that “there’s no truth in it.”

Single and happy, TV’s iconic bahu took a major step at the age of 45 and adopted a nine-month baby girl in 2018. She also named her Dityaa, another name of Goddess Lakshmi. Aww!!

Stop overthinking, as Tanwar’s first love is not a man, but it’s cooking. She loves to prepare vegetarian food and take care of her lovely abode. Quite multi-talented ha!

That’s it, guys! These are some of the lesser-known or not much talked about things about the evergreen actress. May we soon see her slaying on the small and big screen once again. Happy Birthday, Sakshi Tanwar!

(The above story first appeared on LatestLY on Jan 12, 2021 08:40 AM IST. For more news and updates on politics, world, sports, entertainment and lifestyle, log on to our website latestly.com).