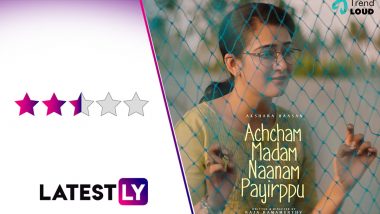 Life outside is slightly better, when she has her little rebellions like eating fish or having a boyfriend. But she still has others decide things for her. Her two friends have a lot to say about her sex life, one a prude who wants her to 'save' herself till her marriage (never mind that she has a boyfriend of her own). The other, a far more progressive one in terms of sexuality, tries to take control of Pavitra's sex life, disregarding what she is more comfortable with. There is also her mother's friend, who keeps pushing her products on Pavitra, whether she wants it or not, actually not. Even the local chemist thinks he knows what Pavitra wants, rather than ask what she wants.

Usha Uthup plays Pavitra's grandmother, a famed Carnatic singer, who expectactly is far more broadminded than most of the folks around her and becomes her support when she is vulnerable the most. Achcham Madam Naanam Payirppu keeps it understated when it comes to depicting Pavitra's struggle in being herself contrast to what her family and society expect a good girl like her to be. Which peaks during her moment of sneaky rebellion when he parents go out of town.

Achcham Madam Naanam Payirppu is cutesy in trying to showing the plight of its demure, confused protagonist, without the need to strongly put its foot across. There are no heavy-duty confrontations, no monologuing, which is a pleasant surprise, but it also waters down impact of Pavitra's emerging out of her cocoon. Akshara Haasan Birthday Special: 5 Childhood Pictures of Kamal Haasan’s Daughter That Are Too Cute To Be Missed.

There are also several inconsistencies that I can't help but not ignore. Like, why does the lecher near Pavitra's house keeps chaining the street dog, when he reveals in their first meeting that the dog is not his. Or for someone who is scared of her folks and even her snoopy neighbour (so much that Pavitra tries to mis-explain things to her), Pavitra is okay in allowing her boyfriend to come to her house despite the lady watching. You cannot ignore the feeling that, despite the runtime of just 1 hour 20 minutes, Achcham Madam Naanam Payirppu feels like an half an hour short film stretched to go beyond 60-minute mark. There are a couple of moments that work well, like the waxing sequence where Pavitra ditches Tamil and curse in Marathi. Or the medical shop sequence. Otherwise, though, Achcham Madam Naanam Payirppu hardly registers an impact.

Akshara Haasan's erratic performance is in a way an asset to the film, considering it helps us in understanding the protagonist's meek and confused nature. At the same time, her rough edges cannot be ignored. Among the rest of the cast, Anjana Jayaprakash leaves a mark with a strong impression as Pavitra's feisty and outspoken friend.

(The above story first appeared on LatestLY on Mar 25, 2022 12:38 PM IST. For more news and updates on politics, world, sports, entertainment and lifestyle, log on to our website latestly.com).