Fans are excited about the project as it marks the second collaboration of of Vishal, Sundar C and Hiphop Tamizha after Aambala. The flick also stars Akanksha Puri, Kabir Duhan Singh, Ramki in the supporting roles. 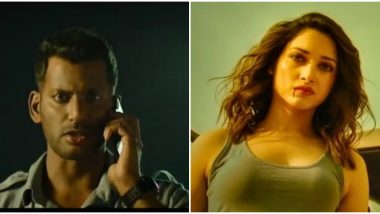 The makers of the Tamil action film titled as Action, just dropped the trailer of the film. The film stars Vishal, Tamannaah Bhatia, Aishwarya Lekshmi and Yogi Babu in the lead. The Sundar C directorial seems to be the perfect treat to the fans of the actor as it has all kind of action sequences a true blue fan would love to see him doing on the big screen. The video of a 2.04 minute video is like a roller coaster ride for all the Vishal admirers. Vishal-Anisha Alla Reddy’s Wedding Called Off, Arjun Reddy Fame Actress Deletes Pics with Ex Fiancé on Instagram.

The video shows him in a swagger avatar. The actor is seen running as well as chasing through some picturesque locations and narrow lanes abroad. The man on mission is determined to kill the opponents and make his country and his people proud. The locations of the film will vaguely remind you of those in Hrithik Roshan-Tiger Shroff starrer War. On the other hand, the treatment given to the car scenes will give you major Rohit Shetty vibes!

Speaking of the ladies, they hardly get a few seconds of screen presence in this flick with zero dialogues. Tamannaah is seen romancing and dancing across some beautiful backdrops. Also, she is seen jumping from buildings with Vishal and that's the only action scene we the female doing as of now.

Fans are excited about the project as it marks the second collaboration of of Vishal, Sundar C and Hiphop Tamizha after Aambala. The flick also stars Akanksha Puri, Kabir Duhan Singh, Ramki in the supporting roles. Bankrolled by R Ravindran, the movie is a November 2019 release.

(The above story first appeared on LatestLY on Oct 27, 2019 05:01 PM IST. For more news and updates on politics, world, sports, entertainment and lifestyle, log on to our website latestly.com).