The Tamil movies Airaa and Super Deluxe is all set to hit the big screens in the end of March 2019. 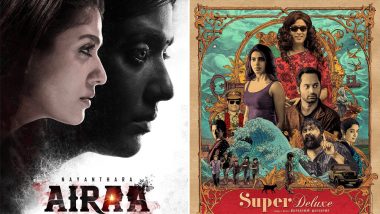 Two big Tamil films are going to release in the last week of March – Airaa and Super Deluxe. Both the films have an intriguing star cast, who have had great hits in the past. They hold a strong fan base and the footfall expected at the multiplexes for these films is unimaginable. When the teaser of Airaa and trailer of Super Deluxe released, the moviegoers were just waiting for the film’s to hit the big screens, it was that gripping. And now the big question is, out of the two, which one will rule at the box office? Baahubali Actress Ramya Krishnan aka Sivagami to Essay the Role of a Porn Star in Super Deluxe.

Airaa stars Nayanthara in the lead and whenever it has been women-centric films, the actress has delivered impeccable performance and her films have also been a box office hit. Be the poster or trailer, Airaa has already received positive word of mouth from fans. Nayanthara would be essaying dual role (Bhavani and Yamuna) in the Sarjun KM directorial. Let’s not forget, he is the one who is known for the short films - Lakshmi and Maa. The horror film Airaa which also stars Kalaiyarasan and Yogi Babu in pivotal roles, is all set to release on March 28. LEAKED! Here’s When Vijay’s Co-Star Nayanthara Will Join the Sets of Thalapathy 63.

Thiagarajan Kumararaja’s Super Deluxe has the leading actors of South Indian cinema - Vijay Sethupathi, Fahadh Faasil, Samantha Akkineni and Ramya Krishnan. The audiences’ expectations are high from this thriller not just because of its star cast, but it is the roles essayed by these characters which has grabbed everyone’s attention. When the poster of Super Deluxe was unveiled, fans were thrilled to see Vijay as a transgender. And the latest update that Baahubali fame Ramya Krishnan will be essaying the role of a porn star has raised more eyebrows. The movie is directed by a filmmaker who has won National Award for his debut film. And hence, fans have high expectations from Super Deluxe, which is scheduled to release on March 29. Super Deluxe Trailer: Vijay Sethupathi's Black Comedy Generates Positive Buzz On Twitter!

Airaa and Super Deluxe does have an intriguing plot, if we go by their respective genres. Though there is just one day's difference in the release date, the battle of which movie will be a box office success, only time can tell. So, which one according to you will perform extremely well? Share your views in the comments section below.

(The above story first appeared on LatestLY on Mar 13, 2019 05:02 PM IST. For more news and updates on politics, world, sports, entertainment and lifestyle, log on to our website latestly.com).