LEAKED! Here’s When Vijay’s Co-Star Nayanthara Will Join the Sets of Thalapathy 63

Vijay and Nayanthara starrer Thalapathy 63 is directed by Atlee. 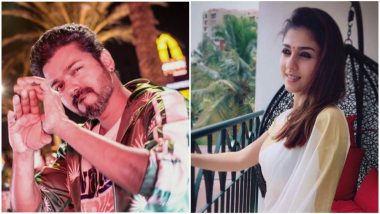 Superstar Vijay and Nayanthara will be collaborating for the second time after Villu which released in 2009. The film directed by Prabhudheva received average response. When it was announced that Vijay and Nayanthara are coming together again, fans were super excited. And this time, it is for Atlee’s film which is tentatively titled Thalapathy 63. Now reports have surfaced online on when Nayanthara will be joining the sets of the film. Nayanthara Cast Opposite Vijay in Atlee's Thalapathy 63.

As per a report in Behindwoods, Nayanthara will be joining the sets of Thalapathy 63 after the second week of March. It is reported that the team shot certain important scenes and at Binny Mills. The first schedule was expected to be wrapped up few days ago. The report also mentions that the team is currently shooting the next schedule at Prasad Labs. However, there is no official confirmation about it yet. 96 Telugu Remake: Samantha Akkineni and Sharwanand Myneni’s Next in Trouble.

Thalapathy 63 produced by AGS Entertainment is scheduled to release on Diwali. The film’s music will be composed by A.R. Rahman. Vijay and Atlee will be working together for the third time after Theri and Mersal. Talking about Vijay’s role in the film, it is said that the superstar will be essaying the role of a football coach. To perfect his character, Vijay is being trained by professionals. The actors who’ll be seen in supporting roles include Daniel Balaji, Yogi Babu and Kathir.

(The above story first appeared on LatestLY on Feb 20, 2019 01:44 PM IST. For more news and updates on politics, world, sports, entertainment and lifestyle, log on to our website latestly.com).