Vijay Sethupathi, Taapsee Pannu - starrer horror comedy Annabelle Sethupathi dropped on Disney+ Hotstar on September 17. Having said that, sadly the film is the latest victim of piracy, as it has been leaked online for free watch and download. 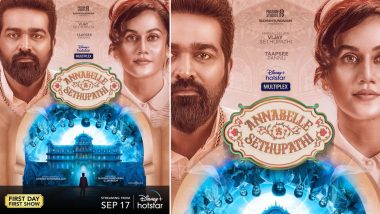 Vijay Sethupathi, Taapsee Pannu-starrer Annabelle Sethupathi was released worldwide on Disney+ Hotstar on September 17. Helmed by Deepak Sundarrajan, the movie revolves around  a small-time burglar, who gets into a palace full of ghosts. And the twist is along with the ghosts, she also finds out the mystery about the owner of the palace. Having said that, as per the reviews, the Tamil-language horror-comedy flick has garnered mixed reactions from critics. However, unfortunately, within a few hours after its release on the OTT platform, Annabelle Sethupathi got leaked online. The movie is now available for streaming on torrent sites. There's an HD print available of the film to watch online. Annabelle Sethupathi Trailer: Vijay Sethupathy, Taapsee Pannu’s Horror Comedy Looks a Promising Watch, Film to Arrive on Disney+ Hotstar on September 17.

However, this is not the first time, a movie has been leaked online for free watch. As almost every film falls prey to this chaos. In the past, many strict actions are taken against these sites, but even after getting blocked, the sites bounce back promoting piracy. This needs severe action by the cyber cell.

For the unaware, Annabelle Sethupathi sees Vijay Sethupathi as King Veera Sethupathi and Taapsee Pannu as Rudra and Annabelle. Apart from leads, the movie also stars Jagapathi Babu, Rajendra Prasad, Yogi Babu, Vennela Kishore, Subbu Panchu, among others. However, the Tamil-language film was dubbed and released in Telugu, Malayalam and Kannada under the same title, but the Hindi dubbed version is titled as Annabelle Rathore.

(The above story first appeared on LatestLY on Sep 17, 2021 01:54 PM IST. For more news and updates on politics, world, sports, entertainment and lifestyle, log on to our website latestly.com).