The veteran actor of Telugu Cinema, Brahmanandam, has turned 65 on February 1. The iconic actor of Tollywood, particularly known for his comic expressions, is one of the most loved actors in the industry. 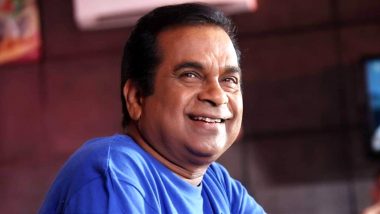 The veteran actor of Telugu Cinema, Brahmanandam, has turned 65 on February 1. The iconic actor of Tollywood, particularly known for his comic expressions, is one of the most loved actors in the industry. He has won hearts in his acting career spanning three decades. His choice of roles and impeccable comic timings have always grabbed audiences’ attention. Brahmanandam, who has featured in more than 1,000 films, holds the Guinness World Record for the most screen credits for a living actor. In 2009, he was conferred with the Padma Shri Award for his contributions to Indian Cinema. Brahmanandam Birthday: From Dookudu To Ready, Here’s Looking At The Popular Scenes Featuring The Comedy King Of Tollywood!

On the occasion of Brahmanandam’s birthday, fans have been pouring him tons of love and thoughtful messages on Twitter. Brahmanandam has shared screen space with the leading heroes of Tollywood and on the micro-blogging site, his fans have shared stills of the veteran actor with those artistes. Referred as the comedy king of the industry, fans have also shared various stills of him from his films that highlight his facial expressions. They are using #HBDBrahmanandam to wish the iconic actor on his birthday. Let’s take a look at the posts shared by these fans.

Wishing Our Beloved ❤️,Guinness Record holder With Most No of Films in World,Indian Cinema Legend,

Happy and Glad to launch Birthday CDP of #Brahmanandam Garu . Wishing the king of Meme world aka Brahmi garu a very Happy Birthday on behalf of Boss @KChiruTweets fans ❤

Eagerly waiting for your Comeback sir. Thanks for all the Memories & Entertainment you Gave. We Cannot Survive a Single Day, Without Using Your References. Thank you Sir🙏#HBDBrahmanandam pic.twitter.com/sNRLwsOX3o

Happy Birthday to the Legend of Indian Cinema Sri Brahmanandam Garu 😊 Thank you for everything🙏#HBDBrahmanandam pic.twitter.com/K4m3FRHKYk

Comedy King Brahmanandam has been winning hearts ever since he made his acting debut with the film Aha Naa-Pellanta! in which he played the character Ara Gundulu. We wish the iconic star of Telugu Cinema a very happy birthday!

(The above story first appeared on LatestLY on Feb 01, 2021 09:03 AM IST. For more news and updates on politics, world, sports, entertainment and lifestyle, log on to our website latestly.com).