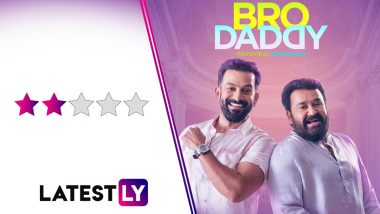 Bro Daddy Movie Review: After Lucifer, Prithviraj Sukumaran makes his second directorial, once again with Mohanlal in the lead. While Prithviraj had an extended acting cameo in his first directorial, this time around he promotes himself as the parallel lead to Mohanlal. What's more, he even makes Mohanlal act as his father, first time the Malayalam superstar has done that for an A-list young star at least in Malayalam cinema (Lalettan did that for Thalapathy Vijay in Jilla). So how is Bro Daddy compared to Lucifer? Bro Daddy: Mohanlal and Prithviraj Sukumaran Croon the Soulful Title Track for Their Malayalam Film.

For one, the genres are quite different. Lucifer is a mass political entertainer. Bro Daddy is a more light-hearted family entertainer. While the trailer may have given you the idea that it would be about a young man's bonding with his young-at-heart father, the film is more than that. John Kattadi (Mohanlal) and Annamma (Meena) had married young, and within a year, they had their only son, Eesho. Eesho (Prithviraj) grows to be a dashing young man (not me, the female characters in the movie say that), who isn't interested in his father's steel business, but is doing well as a hotshot advertising executive in Bengaluru.

John's close family friends are Kurian (Lalu Alex) and his wife Elsy (Kaniha). Kurian once loved Annamma, and in the memory of his old crush for her, he had named his only daughter as Anna (Kalyani Priyadarshan). Annamma and Elsy want their kids to get married to each other. What the parents don't know is that Eesho and Anna are already in love with each other and are in a live-in relationship in Bengaluru. Certain complications happen to this arrangement of theirs, and the couple are now forced to inform their families about their relationship. To Eesho's utter disbelief, his father also has a surprise waiting for him back home.

With a title like Bro Daddy, we expect a lively family man character in Mohanlal's John. Well, John certainly lives up to that but it isn't something new that we are seeing Mohanlal in, the actor already have essayed such character streaks in films like Drishyam and Munthirivallikal Thalirkkumbol, incidentally both also starring Meena. Mohanlal's performance, at times a bit animated, is still fun to watch even when the movie occasionally threatens to turn him into a supporting player for Prithviraj's storyline.

I wanted Bro Daddy to be a fun father-son bonding film, and you cannot blame me for thinking that way with a title like that. Something like an updated take on the Thilakan and Jayaram's equation in the first half of Veendum Chila Veetukaryangal. Sure, the title gets a new perspective when the two storylines of the main leads intersect, and the father-son scenes together have charm, with Mohanlal rocking those portions. But Bro Daddy isn't about them chilling the whole time, they have other problems to take care of, that a simple heart-to-heart conversation could have easily solved up.

Little disappointing that the screenplay doesn't have much to offer in terms of the actors to produce genuine laughs here. The first act especially is shaky as I found the film to merely go through the motions of setting up the main characters. Even the revelation that Anna and Eesho are in a secret relationship doesn't make things interesting, more so because of a lack of chemistry between Prithviraj and Kalyani. This is more discernible, when the other main pair in the movie is Mohanlal and Meena, and the chemistry there oozes so naturally, even if the film only offers glimpses their romance in patches that too mostly in the song portions. Their track, sadly, takes a backstep for the young couple's love story, which is a crime, for a scene of Mohanlal merely massaging Meena's feet had more warmth than the whole Prithvi-Kalyani setup. Maybe that's the point, but since the main focus is around the younger couple, this disparity matters. Bro Daddy Song Parayathe Vannen: This Soothing Number, Featuring Mohanlal, Prithviraj, Meena and Kalyani Priyadarshan, Will Steal Your Hearts!

Things become interesting when the film throws its first twist in Anna and Eesho's relationship, and then throws another one immediately in John and Annamma's marriage. The merging of these twists, and Eesho's harried reaction to them offer some whimsicality. However, the jokes on the virility of the male leads felt a bit tasteless for the present times (a horse neighing for Eesho, and John's mother, played by Prithvi's own mother Mallika Sukumaran, ribbing her other daughter-in-law that her husband isn't performing enough for her).

The best scene for me in the movie was the pennu-kaanal scene which had a couple of funny interactions, be it Mohanlal-Prithvi's coordinated movements, or both Anna's finding themselves in the same situation during the event, and enquiring about each other's health. The best reaction comes from Lalu Alex's, whose delivery of "Annammayum vada kazhicho?" (Did Annamma also eat the vada?) left me in splits. In fact, Lalu Alex almost steals the show from both Mohanlal and Prithviraj in the movie, his short impromptu dance humming a popular Bangalore Days song is quite memorable.

Only if Bro Daddy has more such moments. The movie and its actors work hard to be funny, but most of the proceedings left me bemused rather than amused. It also didn't help that Sreejith N and Bibin Maliekal's screenplay reminded me strongly of two Malayalam films of recent times that I didn't like much, Lal Jr's Honey Bee 2 and Omar Lulu's (out of all people!) Dhamaka (whose central storyline was a bit inspired by a track in Mohanlal's own Pavithram). Speaking of Omar Lulu, Soubin Shahir's totally needless character felt like he was plucked from Happy Wedding, only that he played a matchmaker in the Omar Lulu movie, here he is a wedding event manager. And speaking of needless characters, why was Unni Mukundan in the movie? His presence was promoted in the trailer and the posters, but he hardly has anything to do here. Lucifer Movie Review: Prithviraj Sukumaran’s Directorial Debut Is A Cliched But Stylishly Shot Fanboy Tribute to Mohanlal’s Mass Persona.

As a director, Prithviraj continues to show his knack of making a glossy, good-looking film that will appeal to the masses. There is richness in each frame of the movie, and if that isn't enough, he even inserts a Kalyani Jewellery ad in there. Though, why do some of the frames feel like they are shot with green-screens to make for the background?

But I wish he also put some focus in making the writing tighter, and the editing even more so. Bro Daddy should have been half an hour shorter. The third act, especially, feels stretched with some forced drama and even more forced (and surprisingly, rushed) resolution. BTW, was the final conflict resolution inspired by Vandanam's iconic 'Gadha Jam'?

As an actor, Prithviraj does good enough, playing a character not easy to root for which is more the problem with how it is written. He may not possess the same natural comic flair as the legendary actor who plays his father, though their camaraderie is enjoyable to watch whenever that happens. The question to be asked here is, should he have had cast someone younger in the role. Am I sounding unjust in saying that? If Prithviraj can cast Kaniha as his mother-in-law, despite being of the same age, I believe my question has some validity. Kalyani Priyadarshan is her usual self. Meena was quite lovely to watch here, her expressions so adorable in every scene.

PS: Without wanting to spoil the central conflict in Eesho and Anna's story, it is hard not to shake heads at their dilemma, especially when Malayalam Cinema took a more mature approach at dealing with the matter in a recent movie, starring Anna Ben.

- Over-Drawn With A Couple of Needless Tracks

- The Climax is Weak

At one point of the film, Mohanlal's character says, "Motthathil adikkum over alle? (Isn't it all over-the-top?) " At times, Bro Daddy's attempts to make you laugh felt like that, and the familiarities in the screenplay are too much. But if you are a fan of glossy entertainers, and especially of Mohanlal and Prithviraj, then this could be a half-decent one time watch, especially from the comfort of your homes. Bro Daddy is streaming on Disney+ Hotstar.

(The above story first appeared on LatestLY on Jan 26, 2022 08:59 AM IST. For more news and updates on politics, world, sports, entertainment and lifestyle, log on to our website latestly.com).