Chiyaan Vikram is celebrating his birthday on April 17 and a day before it, director Ajay Gnanamuthu has given him the perfect birthday gift. 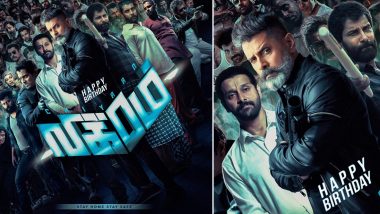 It was in 1990 when Chiyaan Vikram made his debut with the film En Kadhal Kanmani. Besides Tamil, he has also worked in Malayalam and Telugu films. But it took almost nine years for Vikram to establish himself as a successful actor. It was director Bala’s film Sethu that changed Vikram’s career. He then started receiving amazing offers that turned into commercially successful films. In fact, he even earned a National Film Award for his impeccable performance in Bala’s Pithamagan. Over these years, Chiyaan Vikram has entertained the audience thoroughly. Coronavirus Pandemic: Chiyaan Vikram's Cobra Shoot Comes To a Halt in Russia Due To Indian Government's Travel Ban.

Chiyaan Vikram is one such actor who has never feared when it comes to experiment with his looks for films. If you remember, in Shankar’s film I, the actor sported four different looks - a body builder, a beast, a model and a hunchback. He underwent tremendous transformation and then of course, his heart-wrenching performance was lauded by critics and fans. Chiyaan Vikram is celebrating his birthday on April 17 and a day before it, director Ajay Gnanamuthu has given him the perfect birthday gift. He has shared the common display pic, #VikramBDayCDP, on Twitter. It highlights the various looks that Vikram has sported in films in all these years. Cobra First Look: Chiyaan Vikram Introduces us to His Many Avatars and they All Look Intriguing.

Fans are rejoicing seeing this picture of Chiyaan Vikram and many have also kept it as their display pic. Chiyaan Vikram and Ajay Gnanamuthu have teamed up for the upcoming flick, Cobra. This movie is touted to be an action thriller and is said to be releasing in three languages – Tamil, Hindi and Telugu.

(The above story first appeared on LatestLY on Apr 16, 2020 03:25 PM IST. For more news and updates on politics, world, sports, entertainment and lifestyle, log on to our website latestly.com).