Churuli: Why the Controversy Over the Abundant Cuss Words in Lijo Jose Pellissery’s Surreal Film on SonyLIV Is Silly AF! (LatestLY Exclusive) 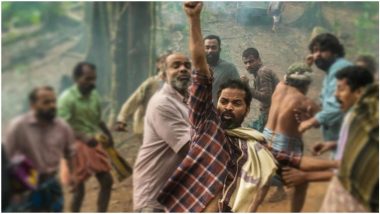 Lijo Jose Pellissery's new movie Churuli has sparked two distinct conversations on social media and in newsrooms. One is with regards to what the film is even about. Filled with surreal imagery, weird plotlines and character behaviours, and a confusing climax, people are still decoding what exactly is the giant, head-scratching puzzle LJP has given us to solve in the new movie. We tried, and I am pretty sure we have only cracked the surface despite acknowledging some prominent theories about it. Churuli Ending Explained: Aliens, Time-Loops, Demons – Decoding the Theories That Could Solve the Mysterious Puzzle of What Lijo Jose Pellissery’s Movie Is About!

The other topic of discussion is what putting Churuli into news these days, and that's about the amount of cuss words in the movie. Thanks to Malayalam films releasing on OTT, there has been a certain freedom with regards to the language used. Abuses like m*yire are used quite freely in these movies, big examples being Joji and Kala, compared to the theatrical releases. However, Churuli goes way beyond the usual usage in Malayalam movies coming out on OTT. If there is a Guiness record for the amount of Malayalam abuses a film can have, pretty sure Churuli would have won that.

With years of experience of watching Malayalam movies of all kinds of form, the kind of language that the characters in Churuli have used jolted me at first, just like its two protagonists Shajivan, played by Vinay Forrt, and Antony, played by Chemban Vinod Jose (also its producer). Soon, I was acclimatised to the milieu that LJP was trying to set up, more so that I was rather curious as to what was cooking here in the village of Churuli, rather than the vulgarity dripping through the tongues of the residents and the visitors there.

However, it looks like not everyone has the relaxed mindset that I had about the language used in Churuli. Some BJP commentars in Kerala have alleged that the director is trying to gain attention by using foul language in his film. As ridiculous as this sounds, someone please remind them that the director's last film Jallikattu has been India's official entry to the Oscars (though it never qualified). Pellissery has developed such a strong fanbase among Malayalam buffs that I don't really believe he needs characters to abuse each other to get some attention. His 11 minute unbroken climax in Angamaly Diaries pretty much did that for him, both nationally and internationally. Funny part is that irony that such statements create - by making it a controversy, haven't you given more attention to watch is a pretty non-mainstream Malayalam movie. Lijo Jose Pellissery Birthday Special: From Nayakan to Jallikattu, Ranking All His Films From Worst to Best.

Then of course, some of the Congress activists who have a beef (no pun intended) with actor Joju George, who arrives only in the third act of Churuli, also have an issue with the movie. As per Asianet News, Congress leader Johnson Abraham has written a letter to Kerala Chief Minister Pinarayi Vijayan and the DGP accusing Churuli of promoting 'goon culture'. Now I don't really need to get into this controversy, we all know what the agenda is really.

Finally, I have to cover some of the accusations I have seen on social media about the movie. Politically motivated or not, I am not very sure, but let me give them the benefit of doubt that they aren't the former. One accusation is that Churuli's colourful language doesn't make it fit for 'family consumption'. To those accusers let me ask you one thing - even if you haven't seen the trailer of Churuli (that kept the swear words at bay), have you really not watched any of the movies made by Lijo Jose Pellissery? If you have, you should have known that most of his films are targeted at a more mature audience. Secondly, have you not watched the disclaimer at the start of the film when it was streaming on SonyLIV? It clearly states that Churuli is suitable for audience of 18 years and above. So whose fault is it really that you watch a movie clearly meant for an adult audience with your impressionable kids for company?

These accusations apart, I really feel Churuli's controversy has been accentuated by social media's dispensation to share clipped videos and images. Before the controversy began to snowball, I had this Mallu friend of mine who showed me a clip from the film that he got on WhatsApp from another friend. He was appalled at the kind of language actors were using in the clip and was complaining how content in Malayalam cinema is downgrading these days.

That's the issue. Pretty sure, most complaining about Churuli's usage of foul language have not even watched the movie, but merely the clips circulating on social media (if they did, the first question they would be asking is - enthu m*yire aanu aa padathil nadakunathu?). Therefore, they haven't understood the context of why this abusive trait persists in the film. (SPOILERS AHEAD) Those who have seen Churuli know that it is shown in the film how the residents of Churuli (which is the hamlet's name) behave in a completely different manner once they enter from the outside world. Their behavior becomes more aggressive and raucous, and they abuse freely without ever worrying about hurting someone and the listeners don't mind, but use even more abuses back at the speaker. Churuli Movie Review: A Rare Lijo Jose Pellissery Misfire That Is Still Fascinating and Mystifying.

There are various theories why they behave so strangely. There is one theory that the village of Churuli is an alternate dimension. Another theory is that it is purgatory. Or that it is ruled by a demon, who allows the residents to behave like him/her. Or that the resident have kept the police at bay for so long that they are now revelling in the lawlessness. The point here, is LJP is trying to portray how humans would behave when they are stripped off their civilities. There are some cuss words that I had only heard when I had witnessed a real-life drunk brawl. Or during a usual village friendly cricket match. Maybe that's the point. People use these words freely when they do not need to be inhibited about them, or are sure won't be facing repercussions for the same.

Nobody likes to hear abuses be it in real or reel life, the same way nobody likes violence. But if you are okay with the depiction of physical violence on screen, why not with the verbal violence too that isn't presented in a glamourous manner.? The characters who abuse in Churuli aren't presented in a heroic manner, like the way actors like Mohanlal, Mammootty or Suresh Gopi were presented in the Shaji Kailas movies of the '90s and '2000s, whenever they added pu monne in their dialogues to make them sound punchier. Instead, the characters in Churuli become more detestable, scarier and unpredictable, more so because they feel raw and real. The slurs used here are not to abuse someone's caste or identity, but instead exposes the individuals for what they are - unlikable entities that lack any morals.

Looking at other cinema, the rawness of films like Satya, Gangs of Wasseypur and Bandit Queen wouldn't have been achieved if the language was more civil there, which is also why these movies were catering to a more mature audience, who have the stomach to digest them. Films like The Wolf of Wall Street, Uncut Gems, Casino and Fury are among the movies with the highest swear words used, and they are all acclaimed movies. They know the characters are flawed, and so their language and behaviour would also need to reflect that, and the viewers have mostly accepted that. It has more to do with the sense of audience to understand why the language is needed there, instead of opting for a more holier-than-thou attitude when coming across such movies.. For Churuli, it is the drop of the civil tongue is where you realise there is something wrong with the world Lijo Jose Pellissery has made in perhaps his most controversial movie to date. That's when you are reeled in to the abhorrent mystique of this dark fantasy.

Churuli, streaming on SonyLIV, stars Vinay Forrt, Chemban Vinod Jose, Jaffar Idukki, Lukman, Surjith, Geethi Sangeetha, Joju George, Soubin Shahir et al. It has its premiere in International Film Festival of Kerala 2020. Recently the Censor Board confirmed there were two cuts of the films, one where the the abuses were toned down and was used for theatrical screenings, and the other cut is what we saw on the streaming platform.

(The above story first appeared on LatestLY on Nov 23, 2021 05:12 PM IST. For more news and updates on politics, world, sports, entertainment and lifestyle, log on to our website latestly.com).