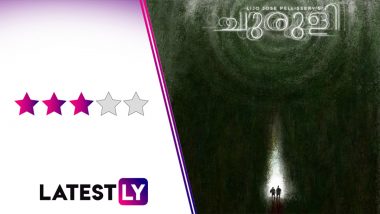 Churuli Movie Review: The first time I saw Anurag Kashyap's No Smoking in a theatre, I was like 'what the heck is this?'! I was enamoured by the visuals, liked the black humour and the performances (even John Abraham was decent) but was very underwhelmed towards the end. Over the years, No Smoking gained a cult following, with many now calling it a misunderstood masterpiece. Maybe there is something still wrong with my 'understanding' but even in these many years I couldn't figure out the film. So why am I talking about No Smoking when I am supposed to talk about Lijo Jose Pellissery's new film Churuli? Churuli: Lijo Jose Pellissery’s Malayalam Sci-Fi Mystery Movie to Premiere on SonyLIV From November 19!

The answer is that Churuli, that premiered early this year at IFFK and is now streaming on SonyLIV, has elicited a similar response in me. The movie baffled me, confounded me, thrilled me, amused me, intrigued me, but by the end, also left me in the cold. After the show is over, my feelings going back to normalcy felt like taking an emotional Walk of Shame.

Churuli, that is based on a short story by Vinoy Thomas and expanded into a screenplay by S Hareesh, is a puzzle with no definite answers. The name itself is a big clue at that. The movie begins with a voiceover of a woman telling 'Shajivan', one of the two leads, about a Namboothiri who went into a forest to catch a Perumadan, a demon, but the Perumadan tricks him by first pretending to be a talking anteater, and then setting him on a never-ending journey by issuing wrong directions.

Interestingly, this storytelling moment never comes later in the movie, even though we do have Shajivan (Vinay Forrt) have an encounter with the owner of that voice. Shajivan and his superior Antony (Chemban Vinod) are two cops who go incognito to Churuli, a hamlet in a hilly terrain near the Kerala-Karnataka border to catch a thief they cannot identify except with a name. Antony and Shajivan are not their real names, which we never find out, and where they go to, even the inhabitants own many names. But that's the least curious part.

The cops go there pretending to be labourers to work at a plantain of a certain Thankan. On their journey, they take lift from a jeep driver carrying villagers to Churuli, who all act pleasantly with them. But once the jeep crosses a bridge made of worn-out logs, the behaviour of their fellow travellers changes. The language becomes more colourful, more biase, as if every pretense of decency has been abandoned before they crossed that bridge. A language trait that all other inhabitants of Churuli, which means 'spiral', possess.

I really don't envy those who are watching Churuli and have to rely on subtitles to figure out what's happening. The coarseness of the language will be lost on them, an essential trait to figure out, or maybe not, what is wrong with the people of Churuli. The abusive language is merely a small wheel in the grand puzzle of the film. In fact, there are scenes where machine wheels are grinding against each other ad we have to figure out on our own what it means.

Answers aren't given out easy for all the questions laid bare by the movie. Is Churuli a village from another dimension? Are the inhabitants there aliens from another planet? Or going by LJP's previous brilliant movie, Jallikattu, do humans not act humans when they drop every pretense of civility?

It is not just the Churuli inhabitants who are strange. Shajivan tells Antony that he feels he has been staying here for long, even though merely a day had passed. A couple of characters claim they find him familiar, though that familiarity never extends to Antony. We hear a story of how two cops tried to catch a criminal there but never got out alive. While a coarse and vain Antony is happy to fit in with the milieu, it is comparatively civil and innocuous Shajivan who adapts better. So are Shajivan and Antony caught in a time loop?

If you expect Churuli to answer all the questions by the end, you would be terribly let down. Pellissery is in no mood to clear the mystery, or rather mysteries. Instead he rather wants you to keep playing the guessing game longer, adding more and more fantastical elements and surreal imagery in the process. Characters appear and disappear at will, an old woman chases Shajivan with an axe for no damn reason, and there are frequent references to sodomy and pedophilia. We also get humanoids with lights on their head, that we have to figure out if they are Shajivan's hallucinations or the overlords of this place, while the glow-worms in the forest have their own secrets.

Madhu Neelakandan's camerawork and Sreerag Saji's score turn the forests of Churuli into a creepy but magnetic being that draws you in, while also repelling you with its darkness. The actors are all fantastic and embrace the crudeness of their characters, including latecomers like Joju George and Soubin Shahir. Like with his other movies, the women are more of peripherals in this flawed man's world. But Geethi Sangeetha is fantastic in the brief screentime she owns as the village's sultry medic. Lijo Jose Pellissery Birthday Special: From Nayakan to Jallikattu, Ranking All His Films From Worst to Best.

Still, Churuli left me with a sense of incompletion, when it doesn't allow the viewer in me any opportunities to solve the giant puzzle box. Rather, sticking to its theme, it wants to continue on the spiralling path to oblivion that feels brash and unsatisfying by the end. Despite the fact that the movie continues to throw mystifying images at you. You know that there is a brilliant solution in there, but you are frustrated that you are never going to unlock it on your own. And that's f*cking annoying!

- Not Everyone's Cup of Tea!

With Churuli, Lijo Jose Pellisery left me with a mixed bad of emotions. He drew me in with a fantastical story filled with abhorrent characters, and yet he left me underwhelmed when he leaves the narrative with no way out. If that was his intention, then LJP earned his victory, even if the viewer in me felt defeated at the end. Churuli is streaming on SonyLIV.

(The above story first appeared on LatestLY on Nov 19, 2021 12:06 AM IST. For more news and updates on politics, world, sports, entertainment and lifestyle, log on to our website latestly.com).