Dev is directed by Rajath Ravishankar, who is making his debut with the film. Apart from Karthi and Rakul, the movie also stars Ramya Krishnan, Prakash Raj, Vignesh, Amrutha, Nikki Galrani and Vamsi Krishna. 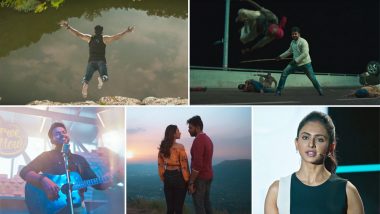 Karthi is playing the lead in Dev, a romantic action entertainer, with Rakul Preet giving him company. The movie aims to cater to the younger audience with dollops of romance, fight scenes and emotions. Dev is directed by Rajath Ravishankar, who is making his debut with the film. Apart from Karthi and Rakul, the movie also stars Ramya Krishnan, Prakash Raj, Vignesh, Amrutha, Nikki Galrani and Vamsi Krishna. Harris Jayaraj is scoring the music for the film. Sidharth Malhotra and Rakul Preet to Reunite After Aiyaary For Milap Zaveri's Marjaavaan.

Scheduled to release on February 14, which also happens to be Valentine's Day, the makers of Dev released the first trailer. The promo establishes the character of Dev, played by Karthi, and how he gets fascinated by a strong-minded woman, played by Rakul Preet. The trailer shows some amazing chemistry between these two. Dev has been shot in foreign locales like Ukraine and Nepal, which adds a special charm to the film. However, the whole Himalayan valley scene doesn't look very convincing. Radhika Apte Vs Rakul Preet Singh – Who Slayed Better in Black Moschino Leather Dress as a Cover Girl? (See Pics)

Watch The Trailer of Dev Here-

Earlier speaking to Firstpost, the director had this to say about why he is making Dev, "Feel-good films were made by several legendary Tamil filmmakers like Balu Mahendra and Mani Ratnam. They are my inspirations to pen a story like Dev. Basically, I’m a traveller and in fact, I came to films because this profession would help me to visit many unexplored places. Even while writing the story of Dev, I visited similar locations where I shot later for the film. For example, if there is a scene placed in the backdrop of snow-clad mountain, I visited a similar place and penned the script. But what was difficult in executing a film travelling in various locations is people management. Thankfully, my production team pulled it off with a great ease."

(The above story first appeared on LatestLY on Jan 31, 2019 07:42 PM IST. For more news and updates on politics, world, sports, entertainment and lifestyle, log on to our website latestly.com).