Dhanush Birthday Special: 6 Fun Songs of the Maari Actor That Will Instantly Pump Up Your Mood (Watch Videos)

As Dhanush celebrates his birthday on July 28, here are some of his hit tracks that you can dance to... fast or slow... the choice is yours. Watch! 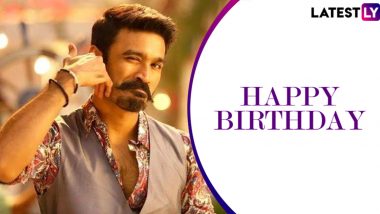 South celebrities in India enjoy a loyal following that almost rivals a diety's. And Asuran actor Dhanush is one of those celebrities down south who enjoys a massive fan following. Originally named Venkatesh Prabhu Kasthoori Raja, he is quite the all-rounder. Dhanush is an actor, singer, lyricist, producer, director, and screenwriter. He is also known as 'Indias Bruce Lee' for his action sequences in films. Dhanush Birthday Special: 5 Reasons Why Maari 2 Actor Is the All-Rounder of Tamil Cinema!.

Dhanush, as a performer has proved that one does not need a built-up body or good looks and chiseled features but acting talent to succeed in films. Apart from all of the above, Dhanush, in many of his films, has impressed and wowed us with his dancing skills as well, which seems to get better and better with each dance number. Karnan: Title Look Of Dhanush's Film With Mari Selvaraj To Release on the Actor's Birthday

And on the occasion of the actor's birthday on July 28, here are some songs of Dhanush that you can dance to... fast or slow... that choice is yours.

We must say that Dhanush is spoiling us too much with his dancing prowess and this is exactly what comes to our mind after watching the birthday boy shake a leg (and even his hands in the song's hook step) in Rowdy Baby from Maari 2.

Why This Kolaveri Di? translatest to 'Why This Murderous Rage, Girl?. However, there was nothing murderous about this song. Released in 2011, "Why This Kolaveri Di?" was rendered by Dhanush and at that time, it was the most-streamed YouTube song of all time. We all tripped (we mean raved and heard this song on repeat) pretty big on this song now... didn't we?

Dhanush made his Bollywood debut with Raanjhanaa and proved that his acting mettle was not just limited to south cinema. And what more... Dhanush danced in the title track and we loved him.

Tum Tak was one Dhanush love song that will never grow old, given that it was also accompanied by Dhanush ticking all the boxes of being a loverboy, along with the song composition by maestro AR Rahman.

This is what we call a ranti mavali kinda south song that everyone wants to dance to when they are in the mood to lose their inhibitions. Danga Maari Oodhari sees Dhanush once again perform some doable massy steps, making us want to dance to his tunes.

Want a slow dance Dhanush number? Enna Solla is the perfect one with Dhanush cooking for his lady love and taking her on long walks. Dhanush and Samantha play a newly married couple and are seen enjoying the cute moments that newly married couples tend to do. Well, it's mushy and cute and all things romantic.

That's it, guys! These are some of the best dance numbers of the superstar. Here's wishing Dhanush a happy birthday and a very busy year ahead full of work. Stay tuned!

(The above story first appeared on LatestLY on Jul 28, 2021 12:00 PM IST. For more news and updates on politics, world, sports, entertainment and lifestyle, log on to our website latestly.com).