Dhanush Birthday Special: 5 Reasons Why Maari 2 Actor Is the All-Rounder of Tamil Cinema! 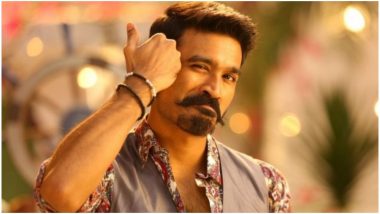 Venkatesh Prabhu – that Is Dhanush’s original name, but he is widely known by his stage name. Dhanush’s fans are rejoicing as their superstar has turned a year older. Born on July 28, 1983 to director-producer Kasthuri Raja and Vijayalakshmi, Dhanush is one of the most successful actors of Indian cinema. Although he has majorly worked in Tamil films, he has done Hindi films as well. Dhanush who has turned 36 today, is not just a great actor, but he excelled as a producer, director, playback singer and a dancer as well. On his birthday, let’s take a look at some of his works, which made everyone say Dhanush is the all-rounder of Tamil cinema. The Extraordinary Journey of the Fakir Movie Review: Dhanush As A Charlatan Puts Up An Endearing Story While Ken Scott Delivers A Feel-Good Film!

Actor – Dhanush made his acting debut in 2002 with Thulluvadho Ilamai, directed by his father Kasthuri Raja. Though the film opened to positive reviews, it took four years for the actor to deliver a commercial entertainer, Thiruvilaiyaadal Aarambam. The actor was judged on his looks but that did not stop from taking any risks when it came to roles. Dhanush received the National Film Award for Best Actor for Vetrimaran directorial Aadukalam. Dhanush made his Bollywood debut with Raanjhanaa and he also did an international film The Extraordinary Journey of the Fakir.

Singer – “Why This Kolaveri Di” is one of the hit tracks, that become popular not just amongst the Tamil buffs but amongst everyone. It was the song released for the film 3 (directorial debut of Aishwarya R Dhanush). The song was not just crooned by Dhanush but also penned down by him. Some of the other songs sung by him include Naattu Sarakku, Thunda Kaanom, Enga Area and more.

Director – Dhanush made his directorial debut with Pa Paandi. The film written and produced by him, was released on April 2017. Well, fans are looking out for films to be directed by him. Dhanush to Remake Ayushmann Khurrana’s Andhadhun in Tamil.

Dancer – How can one miss Dhanush’s incredible dance moves? Be it his energy level, impressive expressions or his cool grooves, Dhanush’s dancing skills has been appreciated and loved every time he appears on the big screen. The handsome hunk who is known for his kuthu steps has grooved to few kuthu songs such as “Otha Sollaala”, “Variya”, “Rowdy Baby”, and more.

Being Dhanush’s special day, one can expect a lot more surprises for all his fans. Will any announcement be made on Asuran is something we have to wait and watch. LatestLY wishes superstar Dhanush a very happy birthday and fabulous time ahead!

(The above story first appeared on LatestLY on Jul 28, 2019 12:01 AM IST. For more news and updates on politics, world, sports, entertainment and lifestyle, log on to our website latestly.com).