Karnan: Title Look Of Dhanush's Film With Mari Selvaraj To Release on the Actor's Birthday 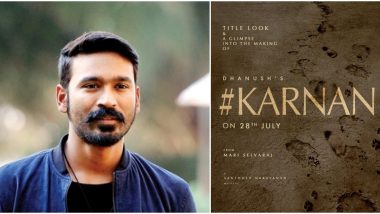 Dhanush celebrates his birthday on July 28 and fans of the South superstar are already gearing up to make it a massive virtual celebration, with a common DP and a big birthday trend on Twitter. The actor too will be dropping some mega treats for his fans on his birthday and one of them is related to his upcoming project Karnan. The film Earlier, it was announced that "Rakita Rakita Rakita", the first single from Jagame Thandhiram, Dhanush's film with Karthik Subburaj will be out on Tuesday and now we have learned that another big update from his other film Karnan will be made on the actor's 36th birthday. Confirmed! Nithya Menen Is Teaming Up With Dhanush.

Makers of Karnan have confirmed that the film's title look and a making video of the teaser will be released on Dhanush's birthday. Till now, we have known that Karnan will star Dhanush along with Rajisha Vijayan, Lal, cinematographer-actor Natty, Lakshmipriya Chandramouli, Yogi Babu, and Gouri Kishen. We are certainly looking forward to the film's title look release. The film happens to be Dhanush's first collaboration with director Mari Selvaraj and hence it is even more special. Karnan: Dhanush’s Upcoming Film to Feature These Three Heroines (View Pics).

Karnan is bankrolled by Kalaipuli S Thanu under his V Creations banner. The film's music is being scored by Santhosh Narayanan. It looks like Dhanush's birthday is going to bring some big surprises for his fans. The actor has a string of projects in the pipeline and while coronavirus may have delayed releases, fans are more than excited to catch teasers and songs of these projects.

(The above story first appeared on LatestLY on Jul 26, 2020 09:24 PM IST. For more news and updates on politics, world, sports, entertainment and lifestyle, log on to our website latestly.com).