Mohanlal had earlier posted an emotional tweet thanking his fans and critics for all the love. He said that he is overwhelmed by seeing the response. 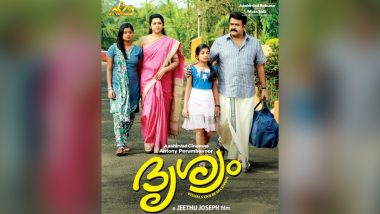 Drishyam 2 was a massive hit amongst the fans and while the team of Mohanlal's film is still basking in the glory of its success, the word is out that the makers have already planned the third part of the film. Drishyam 2 featured Mohanlal in the role of Georgekutty and the second part of the film picked up from where part one ended. Apart from the superstar, the movie also features Meena, Siddique, Asha Sharath, Murali Gopy, Anisba, Esther and Saikumar in key roles. Now, director Jeethu Joseph has confirmed that the third instalment of the film is on the cards. Drishyam 2 Movie Review: Mohanlal’s Sequel to His Blockbuster Family Thriller Is Loaded With Pulpy Surprises.

While talking at a press conference in Kottayam Press Club, the director made this wonderful announcement. He said, "When I discussed the climax of Drishyam 3 with Mohanlal and producer Antony Perumbavoor and they were impressed by it. To get the climax for the second part, a lot of things have to come together. So, it is not possible to guarantee about Drishyam 3 now. For the second part, the discussions on social media are making me happy."

Reviewing Drishyam 2, Sreeju Sudhkaran from Team Latestly said, "The best part I liked about Drishyam 2 is how it writes Georgekutty as a character. We already know that he is a man who is willing to go to any length to protect his family, and now, we realise this facet will also be his curse. I was, however, disappointed with the writing around Georgekutty's family members' parts, as they felt more like chinks in his perfect armour that threaten to break it apart." Drishyam 2 Ending Explained: Will Mohanlal’s Georgekutty Return for a Threequel? Find Out!

Mohanlal had earlier posted an emotional tweet thanking his fans and critics for all the love. He said that he is overwhelmed by seeing the response and has now learned that no matter what, cinema lovers will always acknowledge good work. He added that the love showered by the fans had inspired him and many other actors to improvise. Drishyam 2 is produced by Anthony Perumbavoor under the banner of Aashirvad Cinemas. The film is available to watch online on Amazon Prime Video since February 19 as well.

(The above story first appeared on LatestLY on Feb 25, 2021 09:37 PM IST. For more news and updates on politics, world, sports, entertainment and lifestyle, log on to our website latestly.com).