Dulquer Salmaan Birthday: Mahanati To OK Kanmani - 10 Movies Of The Actor Ranked As Per IMDb Ratings

On Dulquer Salmaan's birthday, lets talk about the 10 highly ranked movies of his on IMDb. Do let us know if you found your favourite DQ movie on the list because we totally did! 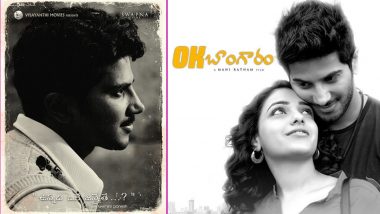 Dulquer Salmaan's birthday is here. The actor has managed to make a pan-India impact with his charm and brilliant performances. Many in North India were introduced to him through OK Kanmani and there was no looking back since then. He is one dishy dude. But since we are aware that it's shallow to rank an actor based on his looks alone, we have decided to talk about the 10 highest ranked movies of the actor on IMDb instead. See... we can look past all the good looks, good looks and good looks! Dulquer Salmaan, Fahadh Faasil, Prithviraj Sukumaran And Their Wives Come Together For An Epic Click (View Pic)

A biopic on actress Savitri, saw Dulquer playing Gemini Ganesan, one of the prolific actors of yesteryear. He was soft, nuanced and likeable despite the wariness of his character.

A movie about a young group of friends and what their life turns out to be made for an highly interesting watch. Dulquer played Arjun, a racer guy with a carefree attitude. The way he transforms in the movie makes it delightful. Dulquer has a mastery in doing such roles.

Dulquer is Faizal Abdul Razak, as aspiring chef who has to return to Kozhikode after his father fails to fund his ambitions. But this turns out to be the most eye-opening time of his life. Ustad Hotel is one of the best coming of age movies of Indian Cinema. It leaves you with such a happy feeling,

A mix of friendship and past meeting present, Kammatti Padam is a great movie about tiding over adversities together.

Dulquer played a mentor and a voice of reason who tries to help members of his cricket club. But an unfortunate incident claims his life. Despite a guest appearance, it seems his fans appreciated his presence in the movie Salute Teaser: Dulquer Salmaan’s Stance As A Cop Compliments The Thumping Background Score (Watch Video)

Dulquer plays the titular character which is a bit snarky and carefree guy who is tailed by a girl who loved his art. It brought together the beautiful OK Kanmani couple Nithya Menon and Dulquer leaving us happy, although the movie in itself lacks the punch.

When love strikes, two conmen decide to mend their ways but Karma has a way of getting back and it does. Dulquer plays one of the con artists and looked the part perfectly. Despite knowing what he is doing is illegal, he carried it off with utmost confidence and charm.

If you have a traveller lurking somewhere in you, this movie will give you massive goals to just go on a road trip. Dulquer and his friend embark on a similar journey from Kerala to Nagaland to find his girl. It's a beautiful movie with an amazing performance by Dulquer.

It's really brave of Dulquer to choose a role which doesn't fall in his comfort zone. He is Avinash, the brooding, geeky guy looking for his father's dead body. He is even-tempered and adorable, to say the least.

It's quite strange that a movie so astonishingly good is so far below in Dulquer's IMDb ranking. OK Kanmani is pure love. Despite being a flawed guy, it's so difficult to not like him. He carries out his role fantastically in the movie.

(The above story first appeared on LatestLY on Jul 28, 2021 12:00 AM IST. For more news and updates on politics, world, sports, entertainment and lifestyle, log on to our website latestly.com).